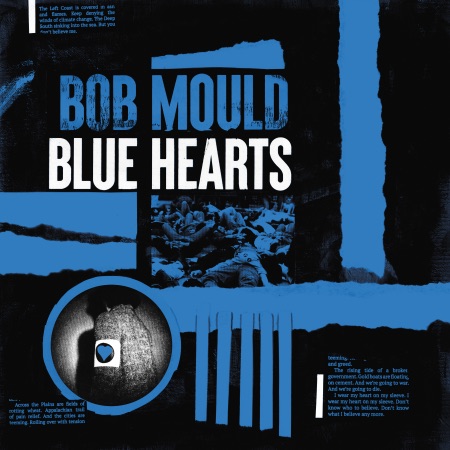 Bob Mould is set to release his 14th solo album this Fall.

Of the album’s first single, “American Crisis” the former Hüsker Dü singer/guitarist had this to say in a press release: “‘American Crisis’ is a tale of two times,” says Mould. “Past Time and Present Time. The parallels between 1984 and 2020 are a bit scary for me: telegenic, charismatic leaders, praised and propped up by extreme Evangelicals, either ignoring an epidemic (HIV/AIDS) or being outright deceitful about a pandemic (COVID-19).”

Of the album’s searing song-cycle, Mould commented that it’s “the catchiest batch of protest songs I’ve ever written in one sitting.”

Blue Hearts was produced by Mould in Chicago at Electrical Audio.

From June 3rd to June 7th, all of the proceeds from “American Crisis” will benefit OutFront Minnesota and Black Visions Collective.

Blue Hearts can be pre-ordered now and will be available on LP, CD, and tri-color Peak Vinyl.

Heart on My Sleeve

Racing to the End