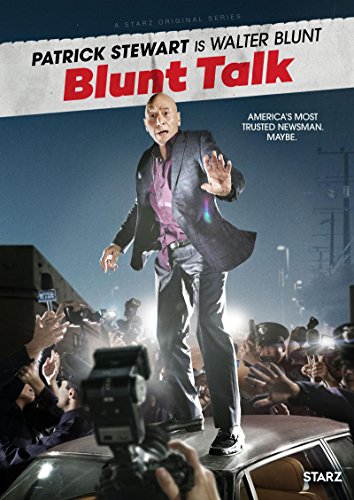 Blunt Talk has been cancelled.

The live-action comedy on Starz was given an initial two-year order with the option for a third season pick-up, but the network passed on that option.

The show stars Patrick Stewart as a British newsman who’s intent on becoming a household name on cable news at night. Blunt’s decisions are increasingly poor and he finds himself in situations that are nearly impossible to free himself from without controversy.

Fittingly, the titular character’s name was lifted from Shakespeare’s Henry IV, Part 1, which was Stewart’s very first effort with the Royal Shakespeare Company when he appeared as Sir Walter Blunt.

Blunt Talk was created by Bored To Death’s Jonathan Ames and Executive Produced by Seth MacFarlane.

Of the show’s demise, Carmi Zlotnik, who’s the President of Programming at Starz issued the following statement: “We are grateful to Jonathan and Patrick for the tirades and laughs that Walter Blunt delivered to fans with such aplomb. While Walter may not be returning to the airwaves, we are incredibly proud of the work that was done these past two seasons by our wonderful partners and collaborators on Blunt Talk, from Seth MacFarlane and our studio MRC, to our actors, writers and crew. It was a very special show with a heartfelt message. It was an honor serving you, Major.”

From a ratings standpoint, Deadline had this to say about the show: “Blunt Talk ended its modestly rated run quietly, with a series-low Live+Same Day viewership of 77,000 for its Season 2 and now series finale on December 11.