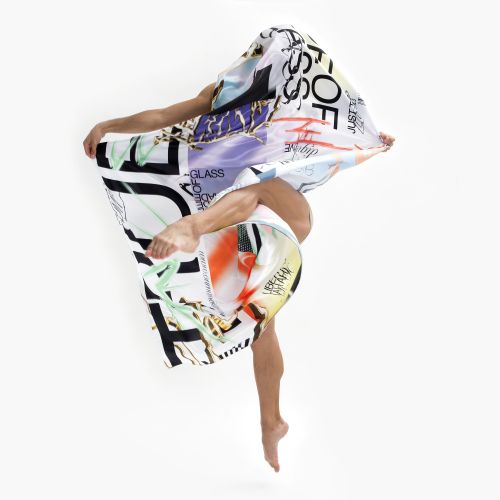 When you say that something is artificial, it’s usually another way of saying that it’s fake or cheap. But what would Wes Anderson’s movies be without their romance with artifice? Arguably, the fact that his films revel in it is exactly the thing which makes them so unique, and also extremely funny. Andy Warhol also loved the artificial; most everything about it, obviously, and continually deployed it throughout his life, which pretty much changed how we view art and understand the very idea of aesthetic appeal.

Made of Glass, the second record from Swiss electro/R&B duo True, also seems to be all about that which you would normally consider artificial: synthetic soundscapes and bright melodies, with the glitter, the gloss topped off with a really sweet voice.

But where things get interestingly deeper is with the subject matter. From the point of view of the lyrics, these songs are the furthest thing from saccharine. They are, in fact, very mature musings on life and very concerned with complicated and relatable topics: losing someone very close to you, feeling trapped in a relationship, suffering from extreme vulnerability, negotiating your personal space, and more.

You may not get the full lyrical seriousness effect on the first spin because the songs are so catchy, fun, and danceable. Like with most medicine, the best way to get someone to swallow something mildly bitter is to sugarcoat it. True seem to know this truism very well.

Made of Glass is out now via Mouthwatering Records.

True’s drummer/producer Rico Baumann and vocalist Daniela Sarda graciously took some time out of their schedule to reveals details about the layered, glossy, and captivating Made of Glass.

Stereo Embers Magazine: Hello Rico and Daniela! While listening to Made of Glass, despite it being so modern, as far as the production is concerned, I still hear some ‘90s nostalgia going on. Was this intentional? Have you been listening to a lot of ‘90s records while writing these songs or is that musical era in your blood?

Rico: It’s probably both. I mean, the ‘90s are back, obviously, and we wanted to have this feel, a bit. I recently started to enjoy some of the ‘90s sounds which I used to hate. That’s so interesting how these things change, no?

Dani: Isn’t it the same with fashion? With certain clothes you think, “Are you serious?!” But sometimes it’s just enough to put Chanel’s Vamp polish from 1995 to get that feeling. We do the same with our music.

SEM: Do you think that the ‘90s has now managed to topple the ‘80s as far as a reference point for music?

Rico: I still think the ‘80s will never go away. They may not be as overtly dominant as they were a few years back, but they’re still everywhere. In the end it’s more about what you do with the sounds of the past to make them feel like now. These things all happened and they are inside of us. But we never try to recreate something that sounds like full-on ‘80s or ‘90s.

Dani: “How Will I Know” by Whitney Houston, unforgettable! How could humanity be so happy then? And, well, Brandy’s “I Wanna Be Down” was killer, too!

SEM: Your new material is very generous and revealing. Writing these songs must have put you in a very vulnerable space…

Rico: It was important to us to make something which we like. You can really go nuts if you start thinking about trends or what people might like or what they liked about your previous songs. So, it felt intimate to make songs just for ourselves. It felt like the only way to do it, really.

Dani: And, of course, it’s an effort to admit one’s own weaknesses and to talk about things that we usually repress, like loss or our own transience. But, as Rico said, it made us feel free being able to do what we thought was the right thing for us.

SEM: In the press release it says that the two of you shared production and writing duties equally on this record. Can you go into that process?

Rico: We really did this together. We sat at the keyboard together, or maybe Dani would play the beat. We sat at the kitchen table for hours writing and discussing lyrics.

Dani: Many female vocalists are trapped in that place where they “just” have a nice voice and therefore should only interpret someone else’s lyrics. Personally, I’ve always been interested in songwriting and production. Rico encouraged me to have faith in this area, as well.

SEM: Has your music changed as a result of this new approach?

Rico: That’s hard for me to say.  I think that it’s more interesting now. At the moment, I’d say the best part about making music is collaborating with other people. To see what they do and react to that.

Dani: I love Rico’s way of producing anyway. Now, it feels more like we understand even more what the other person is doing and why they’re doing it.

Rico: We have an amazing live band now! The music sounds really different from the album, but it’s definitely still our sound. We’re so happy about that and we’re looking forward to playing these songs live.

Dani: And if you know some nice places where we could play, let us know!  We really want to come over.

Find out more about True: