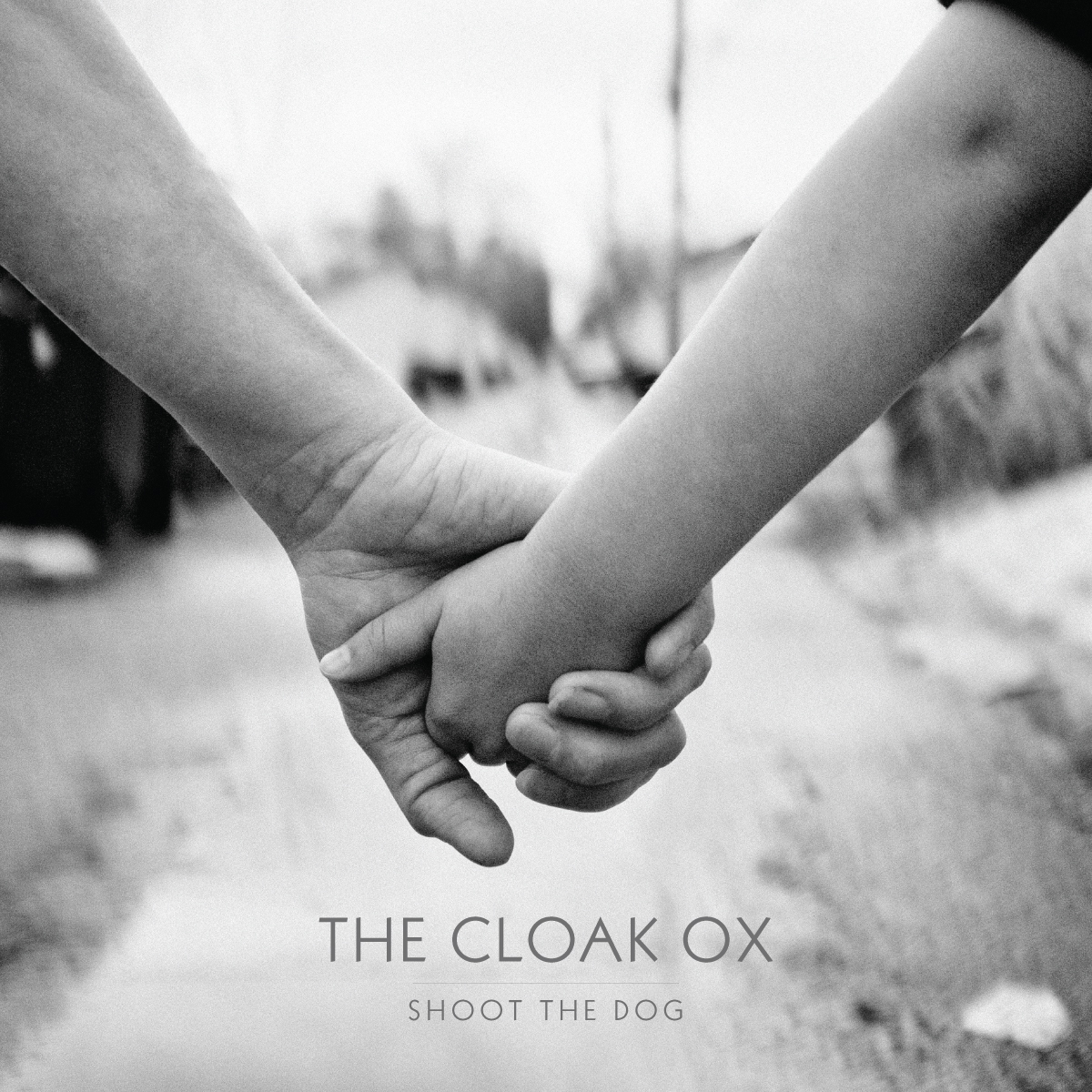 September is amazing me. We’re getting a late summer blast of the kind of warm weather that makes us all feel immortal for a few days, Portland’s MusicFest NorthWest just blew through town, battering me with utter knockout performances – Shuggie Otis, Neko Case, Godspeed You! Black Emperor, !!!, Deerhunter, too many to mention – and my wife and I finally get a vacation to ourselves in a couple of weeks. Excepting that last one, which is pretty much impossible to beat, none of that will trump the release of Shoot The Dog, the debut full-length by Minneapolis band The Cloak Ox. No matter how many exclamation marks attended the live shows I saw, no matter if the weather turned eternally temperate, the release of this one album will be the event that will mark September, 2013 as a banner, forever-remembered month.

Hyperbole? In word, perhaps, but in actual fact, not at all. Beginning life as a wedding band, the quartet is a Minneapolitan indie super group of sorts, comprised of ex-Fog maestro Andrew Broder, Martin Dosh (or just ‘Dosh’ if you’re hip to that) from, umm, Dosh (The Lost Take), Jeremy Ylvisaker, who’s seen time in Alpha Consumer and in Andrew Bird’s touring band, and the ubiquitous Mark Erickson, all of whom put various projects to bed or on hold to form The Cloak Ox in 2010 or so, clicking quickly and issuing a 6-song EP (Prisen) in 2011. Each of them carries the job title of ‘multi-instrumentalist’ in their profile but the best guess here is Broder singing and playing guitar, Dosh on drums – that’s fairly certain – Ylvisaker providing the frequent, transcendent leads, Erickson bringing the Wrecking Crew bass and everything else by everyone. But no amount of familiarity with their collective résumé or their path up to this point will prepare you for the catholic mastery of Shoot The Dog, swerving with seemingly tossed-off panache from a dramatic, intuitive epic with shiver-inducing soul-jazz vocals and emotionally devastating guitar breaks that indeed break your heart (“Yesterday’s Me”) to a dark bar-rockin’ romp (“Josephine”) that first time through, I guarantee, will have you doing lip-synch karaoke, to a self-incriminating confessional that nearly bursts with conviction and a powerful sorrow called “Don’t Listen,” as in don’t listen to me now / I will only lie about it later on. That’s just the first three tracks here but by the end of them you’ll be convinced you’re truly in the presence of greatness. And I fully accept that I’m inviting still louder accusations of the very same hyperbole issue this paragraph begins with but it’s impossible to worry about that with the evidence this strong, strong, in fact, as an ox. If you care at all about the state of the American LP you’ll overlook what you may think are my overcooked enthusiasms and seek this record out.

For a couple of reasons it would seem certain that the band themselves know the quality of the lightning captured in a bottle here. One, there have been no preview videos on youtube (though there have been advance streams of a couple tracks here and there), leading one to conclude that they believe the effect of unleashing it fresh will have impact enough; and two, here they are presenting their debut album proper as The Cloak Ox and they choose to open it with…a nine-minute opus of, at times, near-orchestral proportions. Other than challenging Arcade Fire to a duel, it’s hard to imagine a more confident gesture. No one does that. Stunningly, it pays off.

It begins modestly enough, a slow deliberate bass drum thump with light cymbal taps, an electric guitar trilling in from the distance, but even in that sparseness a mystery attends that gets your attention before a second guitar speaks up with an arcing tone of plaintive despair like Paul Kossoff come back from the dead and without much more than an introductory theme in place something epic and canonical is afoot. An aching paean to the purer pasts locked – as if encased in glass – inside the inevitably more fraught constructs of adulthood, “Yesterday’s Me,” to put it simply, defines tour-de-force. With Broder’s yearning tenor rising at times to a closet falsetto, the bittersweet sting of an emotional nostalgia seduces immediately, reinforced by an empathetic but emphatic bassline and that same drum and trilling guitar that never left. We’re pulled to the fore, and when a lilting bridge of strings and low horns surge in just past two minutes we’re done for, in total thrall and again, I beg of you believe, for your own sake, there is no exaggeration here. Soon enough the thing starts hitting these goosebump-raising, pyrotechnically guitar-centered crescendos designed, it would seem, to stop the listener in his tracks and just surrender in recognition to the stir of emotion as has been happening to me for over a month now. It’s good, in fact, to at last have the chance, now the record’s released, to speak about it rather than carry around the weight of such an exquisite secret. And whereas I might normally be wary of overselling a track when I enthuse like this – thereby killing the mystique – I’m not worried. “Yesterday’s Me” can withstand whatever fusillade of superlatives I can throw at it, it’s a bit monumental that way and as an album opener will remain unsurpassed.

Having established their territory with such a dramatic entrance you’d be pardoned for thinking they’d keep the setting on ‘lovely wrenching epic,’ the emote-a-meter pitching into the red, but, rather thankfully, no. Taking delight in dashing expectation with a Knack-like jolt, “Josephine” is, essentially, a balls-out – though less-then-sunny – rocker and before you let that hyphenated Knack adjective get in your way (shouldn’t, though), know that what this three-minute corker shares with its predecessor is a taut, explosive musicianship that ensures an unrestrained trip to the classic rock club dance floor of your mind if not an actual get-up-‘n’-boogie moment in the kitchen with your headphones on (yes, that may have just happened).

Thus The Cloak Ox wanders. “Don’t Listen,” on the kicked-up heels of “Josephine,” is, as mentioned, an exercise in sublime self-negation, run at slightly quickened ballad pace, filled with a loathing certitude and a somewhat gymnastic vocal hook in its chorus and this is the ideal time to mention the effecting quality of Broder’s voice, the strength/vulnerability quotient of it unwaveringly human, stagger mixed with enough hints of swagger to be the rock’n’roll singer when he needs to be (“Josephine” and “Talking Big”), more jazzily nuanced when called for, which is often, and straight down the middle of the two as on “Andy Broder’s Dream,” a deceptively addictive mid-tempo, mid-album track that calls to mind mid-70’s skewed-pop outfits like Racing Cars, Crack The Sky, Artful Dodger and – gulp – pre-Aja Steely Dan.

If the latter made you blanch (again, it shouldn’t), we’re not talking the clinically over-slick aspects of the Becker/Fagen commodity but instead the virtuosity, the occasionally knowing, elliptic lyric, and having one’s pristine way with the studio, production a marvel throughout Shoot The Dog, complexities of emotion, tone, and arrangement captured with the richness of oil painting portraiture. Epitome in this regard may well be the title track, a six-plus minute, slow-burning catharsis that ends the album and what a masterstroke to go out on. Over alluring, funk-in-slow-motion accompaniment – tabla-like bongo, bass in a half-speed lope, an easygoing rhythm guitar and distance-echoed electric fills that haunt the perimeter – Broder essays what seems an accounting of a life facing a last days scenario (when cannons come / and comes the flash of blade / there’s no more sun / no more ‘what a mess you made’), the title, meanwhile, found in a background chorus while Ylvisaker looses more searing, composure-undoing leads. The track drifts and bumps through a series of movements and by its end any curiosity as to influence is forgotten in a stunned aftermath of breath-taken, head-shaking appreciation. A not, it should be noted, unusual response most anywhere on this record.

“Hot Hands” is another, more lyrically direct, apocalypse-themed track, this time detailing a family nomading about in a lost – or being lost – world that reminds of James Howard Kunstler’s World Made By Hand. Built on a spry, repetitive kalimba-sounding organ pattern, finely-picked acoustic, flute and more hand-slapped percussion, when Broder, in double-tracked falsetto harmony, sings They’re gonna march us out in single file, are we brave?, the heart just crumples, even more than it had earlier when the line there is gonna come a real moment in this life when we will have to choose / how to die drops in with a mix of stoic sadness and stark fatalism. “King Rope” has a writhing, funky-slinky shuffle thing goin’ on whose traipsing rhythm belies the tale of penury and homelessness and street-level serfdom that lurks within. That it’s visited at times by shifting atmospherics and sports an implacable, finger-snapping swing through much of its length only doubles down on the pathos. “Pigeon Lung” finds Broder in no mood, a sharp punctuating clip of rhythm backing him up even as the the band is in a joyous, bouncing unison of a pocket. The most logical choice for a single (though, paradoxically, perhaps wilfully, it’s studded with FCC violations), it’s the kind of infectious, well, pop rock song that’s swamped in pop rock tropes – the ooh woo woos toward the end, the unbeatable staccato-caught rhythm, that damned progression, almost bubblegummy in its addictive simplicity – that’s also not hurt in the least by the shredding flurry of a solo nor the crashing wave-of-sound the song transforms into over its last minute and a half and is the kind of flooding outro we used to expect from the National.

“Talking Big” aside – a punchy Big Star-nods-to-the-Replacements sort of thing that, despite its boisterousness, lacks the power of the one, the bite of the other and the sloppy charm of either – Shoot The Dog could ride to the album-of-the-year sweepstakes on just the strength of it opening track alone. That it multiplies that one unmatched triumph seven-fold quite likely puts it out of reach. Hyperbole? You may think so, but here, let me put these headphones on you and press play. Hear that? Magnificent, isn’t it? Who is it? It’s The Cloak Ox, four musicians from up north that are at the absolute top of their game and the game’s only barely begun. Yeah, they’ve been around awhile, in a variety of iterations, crossing paths, uncrossing them. Those Fog albums are wonderful, The Lost Take has its place in idiosyncratic electro-pop history, but that and all the rest, it was all prelude. The moment they became this band with this name, that something that sometimes, if too rarely, happens, happened, and the way this album plays, the way it feels, suggests a sense of destiny was hovering over the four of them the entire time, waiting for that inauspicious (but oh so auspicious) moment – convening as a cover band at a friend’s wedding, fercrissake – to drop down on them and lock them like four immortal pieces into place.

Those are big words, yes they are, and yes I stand behind them but I don’t even have to. Shoot The Dog, and The Cloak Ox, can speak for themselves. All I really need to say, in the end, is this; I haven’t heard a record this good in years.