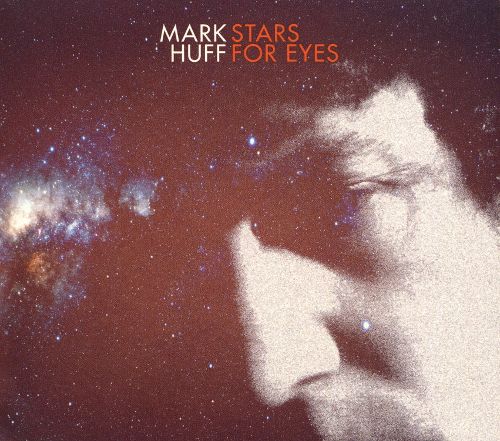 “I drifted so far away from this shore/So far away I don’t myself anymore,” sings Mark Huff on “Carolina Blue” a track from his new album Stars For Eyes.

The Las Vegas-born Huff is not only a master musical craftsman, he’s one of the most honest and direct songwriters around. To borrow a phrase from Saul Bellow, Huff is an open wound of a man, unafraid to drag the darkest of emotional lakes to see what he can find.

And on his ninth solo album he sure finds a lot.

Opening with the rock and roll stomp of “Prison Door,” a grinding rave-up that  brings to mind the work of everyone from Greg Trooper to Todd Thibaud, Huff explores self-isolation and how sometimes the thing that’s ultimately holding us back is ourselves. Meanwhile, the jaunty stomp of “Nightingale” finds him admitting, “I’ve got my eyes on you/I couldn’t be more right/Stone cold sober on a Saturday night”; while on the jangling pop of “God In The Geography,” Huff wisely observes, “Sun goes down/Evening goes cold/The world is new/The world is old.”

Produced by the Grammy Award-winning Chad Brown (Ryan Adams, Dr. John), Stars For Eyes is not only a tuneful album of wisdom and grace, it showcases Huff’s staggering artistic range. There’s the broken waltz of “Big City Down,” which is a loving homage to Huff’s new home in Nashville; the bluesy “Burning Letters” sounds like the early work of Greg Brown, and the crunchy Beatlesque pop of the title track summons Huff’s old British Invasion-inspired band Smart Bomb.

Filled with notable guests like guitarist Doug Lancio (John Hiatt), bassist Mike Vargo (Allison Moorer, Radney Foster), and keyboardist Micah Hulscher (Margo Price), Stars For Eyes is a decidedly rich musical experience. Huff’s compositions are filled with poetic precision and narrative smarts and his timing as a singer gives each number a familiar feeling even on an initial listen.

The album ends with a 1-2 sonic suckerpunch that few albums of 2018 will be able to rival.

In literature the albatross functions as a symbolic curse and in Huff’s song of the same name, though it’s as lush and smooth as they come, it rolls with a dark vision of the future. “We fought a war and everyone lost,” he croons in the same kind of apocalyptic narration that opens 1981’s “The Road Warrior.” While the film’s narrator tells us, “All that remains are memories,” Huff has conjured a world where, “…there’s no one left to betray.” Though a heavy-hearted number, it’s a bleak shot of battered beauty that finds Huff’s voice soaring mightily with moody omniscience.

The album closer is a cover of Leonard Cohen’s “Almost Like The Blues” which showed up on his 2014 Popular Problems album. Teaming up with Julie Christenson, who for years sang with Cohen, Huff takes a swing at this modern classic and he hits it straight over the fence. With breathy, soulful authority, Huff sings: “I have to die a little/Between each murderous thought/And when I’m finished thinking/I have to die a lot.”

In other words, you’ve got to have the nerve if you want to hit a nerve and Stars For Eyes has perfect aim.