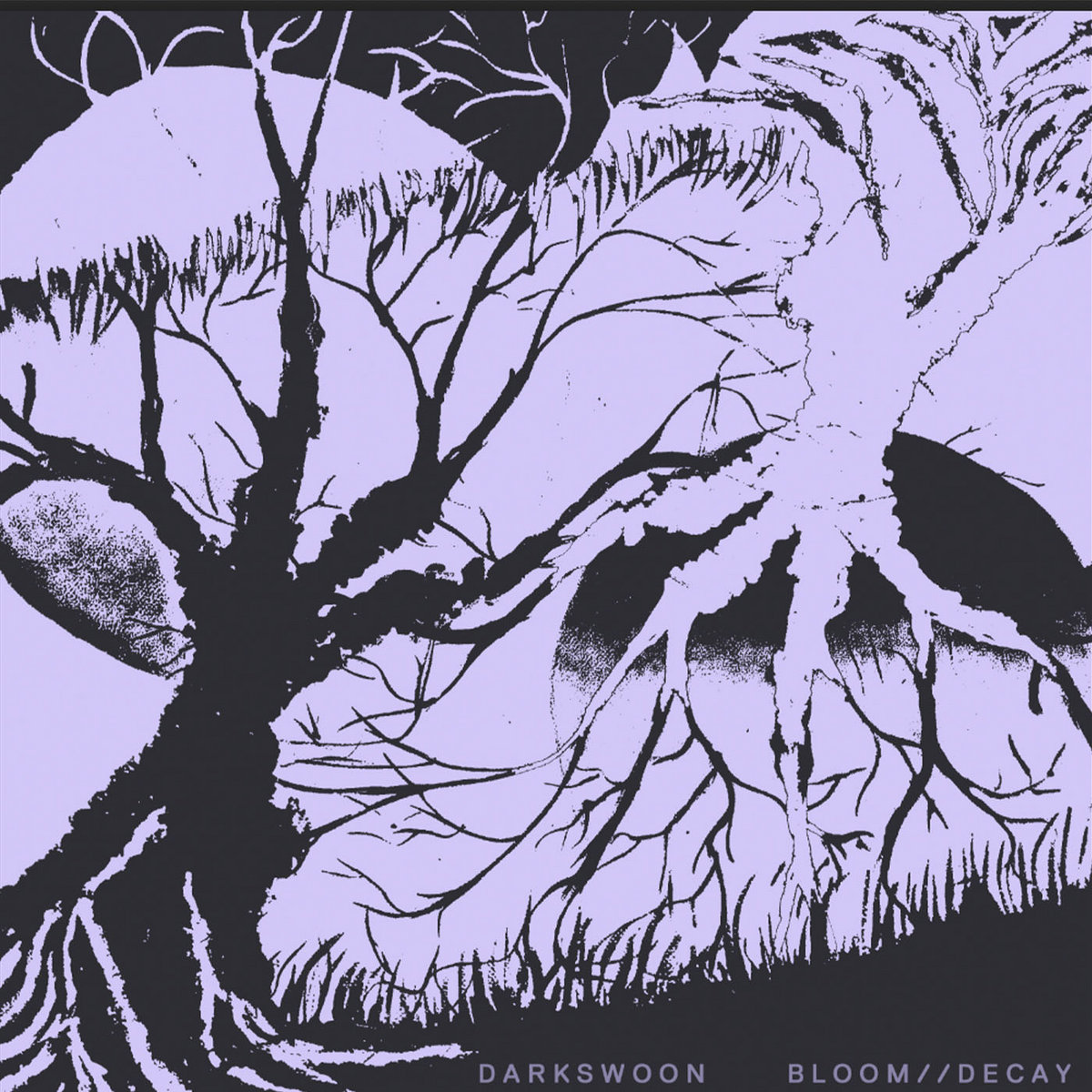 One of the coolest, most rewarding aspects when it comes to writing about music – and, really, one of the coolest things in life overall – is pressing ‘play’ on the new album from a band whose previous effort absolutely floored you and being instantly swept away once again, in this case back in to a dark whorl of – truly – unique beauty. One needn’t go more than a couple measures into Bloom Decay, the latest Darkswoon record, to understand a couple things: One, that you’ve ventured, perhaps even a bit more deeply, into that enchantedly troubled landscape that Bind so bewitched us with in 2019, that place that feels as if you’ve just woken up inside a mythically blistering reality that nonetheless soothes somehow in some inscrutable way; and, two, there simply is no more accurately-named band in the darkwave/shoegaze – or perhaps any – world (and, regarding genre, as asserted in that review of Bind linked above, Darkswoon’s name is their genre and let that be an end to it).

Segueing into Bloom Decay‘s content, a natural opening would be to comment on the relative rarity of placing the title track at the head of the table but in this case, with this band, where there’s really no ‘winner’ of the Best Song prize or, rather, there are nine winners, there’s nothing lost or gained and anyway it has its merits as it throws down something of a thematic latticework upon which the following eight cuts can adhere. As such, it’s a stunner, slow-burning, intense, with a compulsive rhythm structure that, while identifiable to all as essentially ‘Darkswoonian,’ is deeper now, darker, drilling down even further into the solar plexus, dwelling there, as it does throughout, with a seductive menace. Though little doubt a choice made during Decay‘s mixing phase, we believe the core reason is the degree to which these last few years have driven all three of them – singer/guitarist/lyricist Jana Cushman, her partner Rachel Ellis (synth, keys, drum programming) and gender-transitioning bassist Norah Lynn – more intently toward the pulsing heart of this project, a place of refuge, passion and purpose. This album and the strength it displays seems as much as anything a collective, unified ‘fuck you’ to the pandemic and the life-cancelling horse it rode in on.

The remarkable “Eaten By Wolves,” built around a primally resonant progression that’ll stay with you for days, with enigmatic lyrics that get straight to the jugular point, is one of those quiet juggernauts ripe with the tension of a barely restrained rage that this band is just so SO damned good at. “Spellcast,” with its hazy dance groove bassline complemented by the steady handclap beat of the drum machine, aside from being the band at its most sinuous, might also be the dawn of a new hybrid genre that we’re tempted to call ‘funkgaze’ but in any case casts exactly the spell it promises, one abruptly broken by the arrival of the pounding “Under Glass,” as ‘hard rock’ a track as we’ve heard from them though, no surprise, one that gets carried forward with the same deft elegance that has always defined them and the track would, we bet, fill a darkened dance floor as fast as any Sisters track.

And thus does Bloom Decay unfurl, each cut encountered so swamping your senses, circling around your heart like some warm enveloping smoke on a cold dry night, that what’s been heard previous falls back in to a half-dreamed obscurity. As any album should do, certainly, but we all know how few succeed, how rare it is for a full-length to pull you through its components, as this one does, with a level of laser-like visceral presence such that turning away or being distracted in any way isn’t an option, it doesn’t even cross your mind. While to a not insignificant degree this is attributable to the beguiling, swaying, hypnotic quality of the ‘Darkswoon sound™’ and the band’s nearly eerie knack at massaging it to utmost effect – we’re rather marveling at Blood Decay‘s next-level arrangements, simultaneously concise and expansive, both taut and loose however the hell they manage that – but at least equal credit must be given to the words that anchor and make lucid this work. Insofar as any song lyrics go, ‘unresolved tension’ has always been grist for the romance/relationship/life-in-general mill and it’s no different here aside for the gift inherent Cushman brings to the task, expressing the often intensely personal through a lens that refracts with like intensity the current state of affairs on planet earth, visceral in an allusive way – as the best, most effective lyrics are – that tends to clearly illuminate rather than cloud. It is, in other words – and again no surprise here given who we’re talking about – a case of utter vulnerability being so honestly unguarded as to become an almost superhuman strength. Examples abound.

Against the gloaming pulse of its backdrop, that title track opens thusly: I’m still burning from your words/take me somewhere cold and far away//what blooms from this decay?/I’m still learning what to sacrifice, it’s OK until it’s not. Amidst the restrained menace of “Eaten By Wolves”: lost in a forest/teeth between my ribs/licking an open wound, public access womb//my body’s not mine” (that last serving as a de facto chorus). Like a slash of words coming from a fractured spirit, the suitably relentless “This is a Void” unleashes its energy via a whiplash of lines – October bridge jumpers/rest in power//dark sound bath/I want to see blood in the cracks//there’s blood in the truth, “Twist the Knife” exploring – in a sense eviscerating – the brutal dynamics that inescapably underly an intimate relationship, takes its title from one of its final lines: bring me back to life/even if you have to twist the knife and we are, of course, barely scratching the surface (there’s this from the translucent “White Moth,” for instance: there’s no protective shield/to keep us from the potter’s field/white moths to the light,” or, one final one from the haunting – and just damned beautiful  – final track “Burn Collection” There is a desire in mystery/the mind’s tricks and the empty promising/I can do this a little longer) but, yeah, you get the picture.

Yet no matter how rich the words or minutiae – this band’s sound palette, if you will, contains the entire spectrum of melancholic bliss – it’s the album as a whole that’ll follow you into your dreams, tempting you toward mystery, accreting obsessions every step of the way while shedding them at the same rate. Which, we feel, is the point with Darkswoon and explains from the inside out the extraordinary balance they manage, constantly on the verge of pitching into the abyss while steadfastly maintaining their footing. It’s where we always find them, on that daunting emotional fulcrum, teasing out tension with a misson-like seriousness – Darkswoon do many things but fucking around isn’t one of them – all the while never swerving from their purpose as musicians, their songs, those songs’ melodies, forever luring us into the world to be swirled up in a mix of confusion, love, loss, fear, despair, hope and a version of joy touched by each of those. From that perspective, Bloom Decay isn’t just a success, it’s a revelation.

[get swooned in all the standard formats, including vinyl, here if you’re in the US, and here from Icy Cold Records if you’re in Europe, and look for an interview with Jana Cushman in the coming weeks]