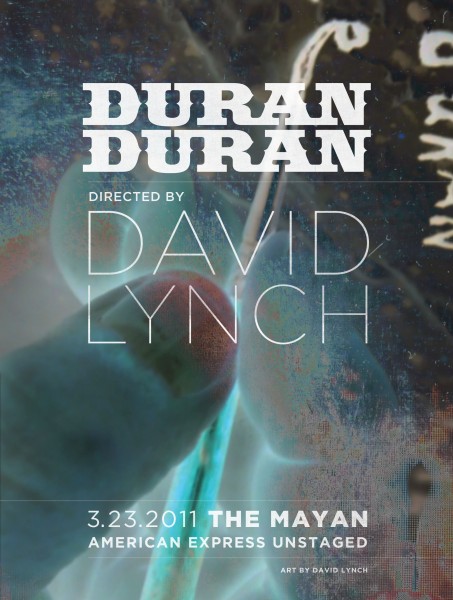 The director of such classic surrealist films as Eraserhead, Blue Velvet, Mulholland Drive, Lost Highway, and Inland Empire, David Lynch has also directed five music videos: “Came Back Haunted” by Nine Inch Nails, “I Predict” by Sparks, “Rammstein” by Rammstein, “Shot in the Back of the Head” by Moby, and “Wicked Game” by Chris Isaak.

Even though they’re stylistically varied, these five videos represent Lynch’s signature penchant for the surreal. For example, “Shot in the Back of the Head” features an animated disembodied head floating up to kiss a lover. “Came Back Haunted” includes quick edits and close-ups of Trent Reznor’s face spliced in with flashes of a disturbingly malformed skull. It’s also known to trigger epileptic seizures. And “Wicked Game” takes place in a black-and-white, time-lapsed world that hovers between sky and sea. Not to mention that its characters are a scantily clad Chris Isaak carousing with a topless woman.

So what happens when such a director decides to work with a synthpop band whose signature style is a penchant for DayGlo videos such as “Hungry Like the Wolf,” “Rio,” and “Girls on Film”?

From the opening number, “All You Need Is Now,” on, Lynch shoots the film in black-and-white, just like “Wicked Game.” He includes the quick edits of “Came Back Haunted,” zooming in for close-ups of band members and their instruments. Additionally, he overlays incongruous color footage on the band to provide a disorienting effect. Even when they perform their debut single, “Planet Earth,” there is a reprise of the disturbingly malformed skull, this time as a freakish balloon drifting ominously over the screen.

Lynch’s visual effects dampen the pop and deepen the edge. They also make the band seem more mature and artsy. Duran Duran must have known that Lynch would achieve this effect when they chose him as director. In their 30th year of existence, they seem more relevant than ever and not just a nostalgia act. This relevance appears in the way in which they confidently perform their recent material at the beginning of the film.

Lynch transforms even the band’s biggest DayGlo hit videos, like “Hungry Like the Wolf,” from 80s’ camp to horror camp: as the band performs the song, Lynch cuts to grainy, black-and-white footage of a panting wolf with flashing eyes. The quick edits and extreme close-ups return, and Lynch explores what could be called the campy side of surrealism.

The visual effects accompanying “Rio” are straight-up surreal: overlaying the verses is a spinning bicycle wheel, its motion congruous with the momentum of the synthesizer riff but again distracting from the pop sensibility and camp of the original video. Flames flare from the bottom of the screen during the choruses, reflecting the heat of the original video’s tropical setting. Lynch’s treatment takes the original video out of its literal interpretive framework and gives it a surrealist poetic tone, similar to a Dalí painting.

Throughout “Girls on Film,” Lynch actually puts girls on film: girls filmed cheering in the audience at the concert plus another overlaid visual effect of girls scrolling on an old filmstrip. This isn’t so much surrealism as it is meta-cinema. He transforms Duran Duran into practitioners of meta-cinema – that is, cinema that is aware of itself as cinema. Once again, Duran Duran become mature artists and not the synth-pop boy band that they were in the 1980s.

Duran Duran: Unstaged is available on Netflix right now. Catch it while you can. You’ll see Duran Duran as you’ve never seen them before, courtesy of David Lynch.