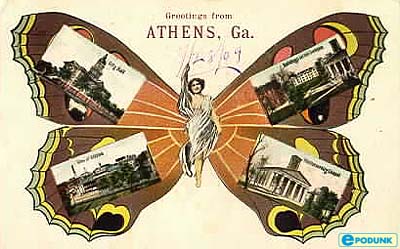 When a place’s music scene makes as big an initial splash as Athens’ did in the early 80’s – REM, Pylon, B-52’s et al – it’s easy for those of us not living within its city limits to forget, as we follow the bouncing hyperbole ball to Chapel Hill, Louisville, London, Seattle, Brooklyn, Austin, Manchester and back to Brooklyn, that the creative fervor that animated that scene in the first place has almost certainly never subsided, it’s just the spotlight’s been focused elsewhere. Furthermore, it can be argued and with force that the spirit thrives all that more vigorously in the relative darkness once the lights-camera-action has moved on to its next media-constructed target. That’s certainly been the case for every locale noted above, and, as represented by the two records sitting here in front of me trading headphone time, it’s undebatably true in Athens GA as well. With this as the evidence, in fact, I’d say the town’s music scene is still in rude health.

‘Still’ because, of course, as implied, it’s been in fine fettle the whole time, the north Georgia college hamlet acting like an indie incubator, spawning, in the wake of that first rush, songwriter mega-talents like Vic Chesnutt and Matthew Sweet, the Elephant 6 Collective, Kindercore Records from whence Of Montreal, and Drive-By Truckers. So open and diverse is the creative atmosphere that its graduates span the spectrum from Bubba Sparxxx to Widespread Panic, birthing the likes of Danger Mouse along the way. So it’s only natural that bands and artists would continue to add to the city’s musical legacy in thriving droves, and indeed, weaving themselves into the historic mix are both Casper & the Cookies and The New Sound of Numbers.

Co-released last February on Wild Kindness Records and Stuff Records, Casper & the Cookies fifth album Dingbats (named after the font, cited in the post-punk funky “Drug Facts“, or after an object, like a brick, that can be used as a missile; you decide) is a tour de force of rocklecticism at its sharpest, madly veering the gamut while never abandoning the rudder, as if answering to the innate guidance system of rock’n’roll central control.

From the indie drum-boom triumphalism of opening track “Improvvisamente Ardito” to the high school-tinged “Jennifer’s House” that’s nothing less than a driving, unwinking homage to Julie Brown through the menacing, psychedelic southern smuggler’s fairy tale “Lemon Horses” and “Omni”‘s oddly frantic prog pop japes swirled into a Contortionesque fricassee, Dingbats counts, for me, as 2014’s first great surprise. Intelligent, crafty, imbued with a capriciously insatiable playfulness and a dead serious curiosity, the record offers more than we have any right to expect.

Want a sadistic hostage nightmare ditty that’s both poppy and splenetically tense like it’s throwing the Fall’s guitars around a suburban dungeon? Try “Spin ½.” Got a hankering to hear the Bongos with twitchy math rock tendencies? “Thing For Ugly” is just what you’ve been waiting for. Need something slower, more sensitive but with all the bite? Check the Badalamentian ballad “White Noise, the most beautiful song that’s ever begun with the line “I like the way it feels when I slowly cut your throat,” or if that’s too much go with album-closer “When The Moon Was In Command,” an ersatz show tune of a song somewhere between Rocky Horror and Cats, complete with cello solo and in possession of an over-arching gorgeousness that might well bring Sam Coombes to tears of envy.

Begun in the mid-90’s by Jason NeSmith (erstwhile Of Montrealer) as a solo cassette project, more or less, and utilizing an evolving version of the name along the way, Casper & the Cookies have toured with a passel of luminaries – Deerhoof, The Apples In Stereo – and even played backing band to Daniel Johnston in his gig at the Athens Pop Fest in 2007. But their star is their own and, after four previous LPs and numerous singles/EPs/comp appearances, the band (besides NeSmith add wife Kay Stanton, AJ Griffin, and Gregory Sanders), Dingbats, should there be even a fleeting scintilla of justice in this world, is the record to vault that star into the ascendant.

Fronted by vocalist/12-stringist Hannah Jones (ex of Circulatory System), The New Sound of Numbers released Invisible Magnetic in mid-October 2013, their second effort after Liberty Seeds landed in 2006, a lengthy gestation period by any measure – one assumes involvement in other Athenian projects is the main culprit – but one amply justified by the results.

Described, and rightly, on the Cloud Recordings site as “an experimental post-punk band,” the NSON come to that label quite honestly, sporting as it does former members of post-punk legends Pylon (Vanessa Hay), experimentalists Bubbly Mommy Gun (keys man Mercer West and drummer Grey O’Connell) and, falling between the two, wobbly psych poppers Olivia Tremor Control (John Fernandes on violin and clarinet). Seamlessly melding an underlying angularity to a groovetastic carapace – evidence everywhere but check out “Patterns In A Test Tube” for signal proof; off-kiltered guitars balanced by a swimmy smooth bass and the dual lilting saw of left-right violins – The New Sound of Numbers is primarily percussive at heart, no surprise given Jones’ role in Circulatory System and the presence of no less that four percussionists on board here, which doesn’t include the drummer. That battery of beat-driven noisemakers is mere insurance, however, as in fact the operating principle at work here is to treat every element as a rhythmic conspirator. Synths, vocals, melodica, they all end up overlapped in a sometimes slinky, sometimes (agreeably) clunky, most often slinky-clunky, melange of invigorating, challenging pop from an alternate universe.

Tricky, playful astonishment awaits, from the horn-abetted Fall Ubu romp of the opening title track to the clarinetted krautrock roadtrip instrumental “Feel” to the way “Complete”‘s multi-textured vocals are layered over a perpetually nervous, charge-ahead tempo with such finesse to suggest the Raincoats coached by the Feelies. Because of the prevalence of avantish rock structures built around one (or more) strong and clarified female voice(s), the Raincoats are a touchstone difficult to avoid (“Antenna” posits the London DIY pioneers digging deep into a Beefheartian density), though too there are excursions into earthier Slits-trampled territories as on the album’s longest and possibly most impressive track “Turn Around” and the mystic-hit-with-ratttletrap rhythm joy that is “Juju Missive.” Granted, such references aren’t always useful and their ease of use can sometimes detract from the uniqueness of the band at hand but that’s not an issue here, as any time this writer pulls out such names in service of a review (and I may as well add “New Dance,” a space alien mess-around that sounds more ‘Mo-Dettes from Akron’ than it does ‘NSON from Athens’) it’s because I’m too damned excited to keep quiet about it. And in any case, none of it is any exaggeration and anyone still in thrall to the above-mentioned would be well-advised to hunt this record down (here, let me help).

As for that word ‘experimental’ in “experimental post-punk,” the NSON do have a flair for the intrepid, letting the freak flag of adventurousness fly on more than one occasion. The intentionally (and wonderfully) puerile “Like Children Do,” with its zany, mildly disturbing sound effects and simple-but-resonant repeated lyric seems to mimic an episode of Pee Wee’s Playhouse gone even more mental, before next-up track “Green Wind” meanders like a minstrel in electric tights into a droning psych-folk forest, a constant low-level squall of violin keys and wanderlust guitar accompanying.

Awash in multitudes, this is a music that invites hyphens and hybrid idioms, as a nine-strong band with an embarrassment of résumés might well do. The New Sound of Numbers come in bearing a legacy and with a kind of irreverent confidence to uphold that legacy with panache, and once again I need to revise my best-of for 2013.

Somebody hand me down my editor’s pencil.