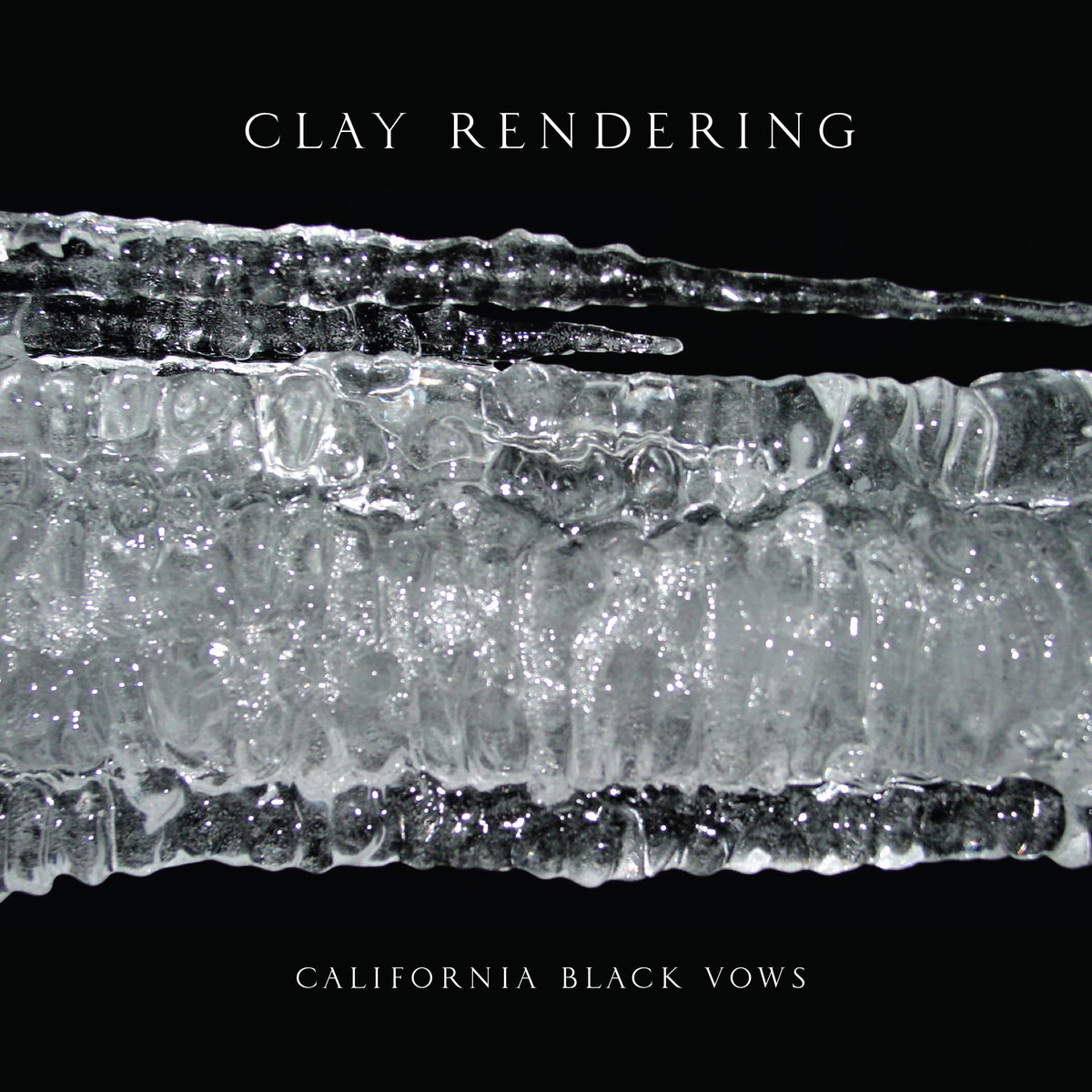 For those wondering where this situates them along the great shadowed terrains of the darkwave map, California Black Vows (out June 14th on Hospital Productions) finds them still suffering with joy on the precipice where the Velvets hang out with the sun-bleached, still-singing remains of a post-postpunk Nancy and Lee. Overlay that with a side of Suicide cut from a cloth found just outside Death Valley and you’re more than half way there. Or maybe you’re not. All impressionistic takes on the Clay Rendering aesthetic are valid so long as they suggest a parched heart somewhere south of Vegas sifting through the charred sticks of a drifter’s long-dead campfire as if it’s some sort of blackened I Ching thing.

Whereas up to this point Mike and Tara Connelly’s stark panoramas of desolation noir, charted in the course of a wounded – but unflinching – wanderlust, have never been absent an astringent beauty evocative enough to give the devil the shivers, there remained a nagging sense, just a sliver, that an intuitive shade or two was missing, left adrift somewhere, yet-found. No more. The nine tracks on California Black Vows, seen through a singular lens, present with a constancy of purpose, a tooth-and-claw vibrancy that can vary in pace from hymnal to a thrashing restraint but not a one of these tracks lacks the creeping sense that a swirl of demons real or imagine is breathing down their narrators’ necks. Hallucinatory and darkly totemic. these songs have the feel of a fever-dreamed version of A Touch of Evil, full of portent, rich with fleeting omens.

Opening with an ominous tentativeness of bass like JJ Burnel in a slow-motion hell, first track “Blood Into Wine” soon has added a peculiar chime as if the wind’s picking up before a drive-by peal of feedback carries in Mike’s vocal (he and Tara share that role pretty much equally), weary, knowing, a notch above a whisper. With its emphatic electric chords suspended in reverbed isolation, the song by itself could make a case for Clay Rendering being the Jesus and Mary Chain of the American desert west but it’s a comparison that gets fairly buffeted this way and that as one works one’s way down the tracklist.

The dire rush of “Another Roll of the Iron Dice,” with its central refrain of ‘she’s fucked, there’s no way around it,’ has a Curve-ish roar of triumphant nihilism to it, “Once in the Well” a mournful mystique voiced by Tara that seems to find her in a dusky Morricone canyon, complete with a gentle foreboding that echoes darker the deeper she travels into it, a sense of resigned, trapped fate matched – at least – by the sorta title track “Black Vows,” though the trail here, with a quiet unholy tension, leads more into a previously unexplored Cave. Later, the teetering “Don’t Understand You” churns through it’s call-and-response vocals and tricky contradictory lyrics in such deftly brutal fashion that, even considering the cinematic haze that settles in for several bars mid-song, could qualify it as the one-thousand-first of Shellac’s 1000 Hurts, this just before the lengthy “Closed Circle” attacks with a gorgeous pulsing static, a primordial majesty, the elegiac and elemental locked in an unlikely marriage, celestial in a hammer-and-tongs kind of way.