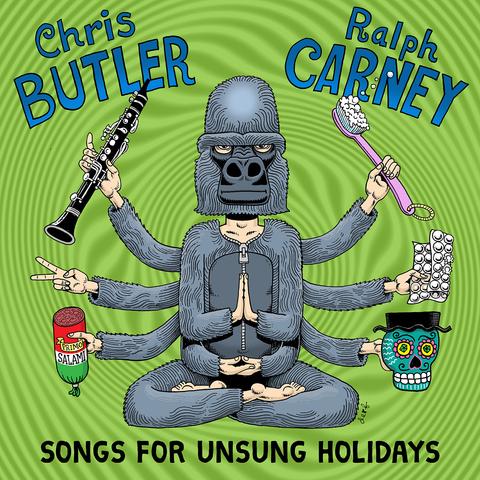 Well my gosh it’s the holiday season, isn’t it? That means we here at SEM really must pause and give our full attention to this year’s finest collection of holiday songs bar none. No, not that kind. This is Stereo Embers, remember? We’ll leave those more conventional, market-driven compilations to others and swerve ourselves straight toward the, shall we say, more idiosyncratic.

Released on Salami Appreciation Day (Sep 7th; it’ll make sense in a second) by those unflinching trailblazers of the odd and challenging, Cleveland’s Smog Veil Records, Songs for Unsung Holidays is the work of two of the most fertile, adventurous musical minds the pop-slash-rock world has known for the past forty-five years. Though neither man needs any introduction, we’ll give you two quick ones anyway. The late Ralph Carney – he passed very unexpectedly in 2017 not long after this project wrapped – came to music geeks’ attention when, in that Devo-led wave of notoriety that swept up bands in the ‘NEOhio’ triangle of Kent, Akron, and Cleveland in the late 70’s early 80’s, Warner Brothers snapped up Tin Huey and released their marvelously askew debut Contents Dislodged During Shipment, as canny a collection of killer off-kilterness as you’ll find and one that, not incidentally, was seams-a-burstin’ with high-end precision chops (think Captain Beefheart in a new wave context. Maybe kinda sorta). From there his decidedly non-careerist career took him to the wide open spaces of the music business as a crucial session horn man, careening with aplomb and an intrepid sense of musical humor from the B-52’s to Run DMC to the Kronos Quartet to (perhaps most famously) Tom Waits to too many more to mention, not least his collab with his nephew – and Black Key – Patrick.

Chris Butler, by similarly errant token, also gained his initial renown – limited though it relatively (sadly) was – in Tin Huey, brought in to the fold via Ralph’s heel-dug insistence though that stint followed his brief membership in the legendary, still-going Numbers Band AKA ’15-60-75.’ Since then? Ah, you know, not much. Formed the Waitresses, writing all their songs, lyrics included, that most fans would have thought originated with charismatic singer Patty Donahue, penning in that process such minor successes as “I Know What Boys Like” and “Christmas Wrapping” and has since propelled himself though an invincibly self-charted solo career the pinnacle of which may well be the sardonically-titled Easy Life, during which time he’s made his way in to the Guinness Book of World Records for having been the genius genesis behind history’s longest song (“The Devil’s Glitch”), produced an occasional series podcast-like videos astutely dissecting early-era rock’n’roll tropes and, oh yeah, becoming a respected expert in the world of mid-century furnishings.

Like I said, not much, but in any case, in hop-skipping fashion this brings us to Butler’s phone ringing some time in 2016 and it’s Carney asking “How come there aren’t any silly bands? Let’s do a project!” Spurred at least partially by having had too many fans asking for a follow-up after “Wrapping” became a perennial favorite – a Thanksgiving song, maybe, or how about Easter? – to which naturally Butler would demur if not recoil, the result of Ralph’s prompt is this variously wild, playful, daringly whimsical collection that, above those and many other possible descriptors, is a greatly satisfying delight to behold. None too surprising, I grant, given who’s involved, but chief among the myriad reasons for stating that is the extent to which Songs for Unsung Holidays takes that squiggly, mischief-avant promise grown in the pair’s Tin Huey DNA and runs with it, hellbent, breakneck and in all directions, often all at once. The shackles – though true, barely there in the first place – aren’t just off, the shackles are shattered into your traditional NEOhio smithereens.

Trading lead vocals based, presumably, on who came up with which ‘holiday’ and the lyrics to match, the duo otherwise throw their eight plus decades of combined sonic chicanery at these basic sixteen cuts (tracklist details differ from CD to LP) with all the panache and expertise you would expect of a couple of ‘free jazz goes pop!’ hurlers as they both surely are. “Tapioca Day (July 15th)” aims at and hits ‘wacky tropical vibe’ as imagined by landlocked midwesterners with a kazoo-sounding theremin thing (who knows? Isn’t clearly either one, but…) and some loungey pedal steel and slide guitar work. “Bald and Free Day (Oct.14)” imitates Zappa imitating Dylan imitating a lost blues chancer, chugging rocker “Bubble Wrap Day (March 18th)” is every garage band that ever goofed around with whatever came to mind only this time it’s the best thing they will ever come up with, above-mentioned “Salami Appreciation Day” proceeds along at an appropriately plucky, somewhat plump pace, Butler slicing up some fine salami facts – it can be stored at room temperature for up to 10 years, for one – while long wandering notes off Carney’s clarinet offer up a kind of fly-buzz jazz. Then there’s the likes of “Hippie Day (Sep. 20th),” lying in a bed of maharishi drone while a persistent flashback guitar riff keeps appearing as if bouncing of the wall of the Avalon Ballroom, Butler exhorting the world that we need a ton more longhairs these days to address the critical zeitgeist imbalance we face in this cold, fucked-up digital age. Oh, and get this: the jammy instrumental coda that carries the track to its final (amusing) spoken word bit includes – dig it – a flute solo.

An album like no other, as pointless as it is crucially essential, it’s a collection that leads in its willfully meandering way to a few conclusions, all related. One is, no one else could really do this and even think of getting away with it, to have chops and the no-fucks-left-to-givitude necessary to follow through on a crazy idea that borders in its essence on a drunken dare. Another is that, if anyone had even the slightest notion that they had either of these artists pigeon-holed as, say, the Waitresses guy and the Tom Waits horn guy, this record’s variety of styles and brash appropriations will rudely disabuse. Lastly, it is certainly fair to say of this fearless duo that the muses lit each of their individual fuses in a rather peculiar way and the world is far richer for that.

So, yes, there is much on Songs for Unsung Holidays that defines ‘silly’ – that was the point, after all – but it’s an inspired and to some extent an almost divine goofiness, an irascible streak of which has forever been apparent in both these musicians but especially Carney, a fact that on its own is a silencing rejoinder to any that would think it somehow disrespectful that this album will the the final statement from Ralph Carney. If you listen carefully to the silence between the tracks you can just about hear Ralph in the beyond laughing at the all-too-typical inanity of fate, that tongue still planted with glee in his cheek, that mischievous glimmer still residing in his eyes and forever emanating outward.