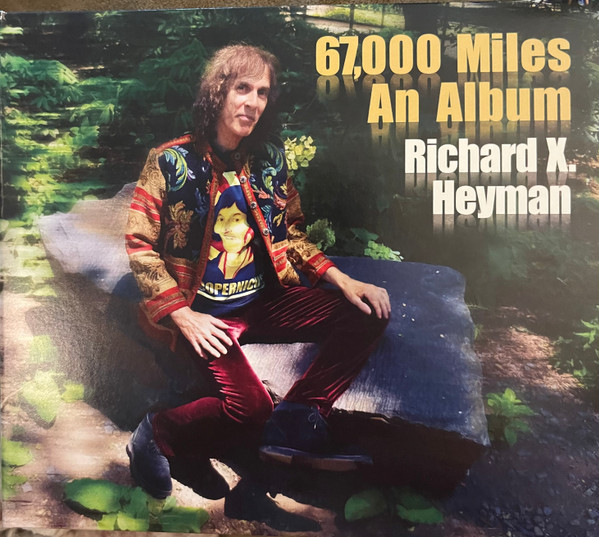 R. Stevie Moore before his recent retirement. John Andrew Fredrick under the guise of The Black Watch. Daniel Johnston. Jad Fair. Robert Pollard. To a small clutch of music nerds out there that relatively sparse grouping shares among them one central immediately obvious attribute: a work rate that would seem wholly unsustainable to your average mortal and the discography that comes with it, one so staggering that just scrolling through it can leave one exhausted. To this class of the restlessly fecund must be added the name Richard X. Heyman.

Now, in this case a lengthy list of releases on Discogs might be suspected to some degree seeing as Heyman turned seventy-one this year but a quick scan down that list mostly undermines that presumption. Sure, The Doughboys, formed in the guy’s hometown of Plainfield NJ, had a couple singles appear on the Bell label when he was still in high school – they reformed in 2000 and have subsequently recorded eight full-lengths since 2007 so, yeah, let’s add that to our dizzying premise – but Heyman’s debut solo album Living Room! didn’t drop until 1988 by which point he was already thirty-seven. Since then? Well, according to our calculations – lessee, carry the one…no, wait, start over…oh never mind, our brain hurts. It’s a lot, OK? And now here we are finally catching up to him which itself is a bit of a challenge needless to say but the saving grace? The consistency over the years in both quality and tone have remained quite constant so far as we can tell, which is to say any of those albums we’ve just poked our head into results in some variety of ‘Ooh, yes, those are some fine pop chops’ and therein it came to us, so obvious it’s hard to see.

When considering that group lumped in together up top, relative outliers Johnston and Fair included, what binds them into a loose but immutable club is their attachment to the mechanical wonders of pop music, its minor chords, its melodies, those progressions that invariably cascade down the gears between exuberance and sadness. As it turns out, aside from there being a spigot on the thing that’s apparently stuck on ‘gush,’ there’s something in that pop machinery, something Goldberg machine-in-reverse humming deep in its inner workings that would seem to allow – demand, even – that complexity be expressed in the form of simplicity. While naturally poles apart as most would agree, within that ragtag, exclusive club those presumed opposites conspire like two contagions lashed together. Subtle yet explicit, demanding but generous, simultaneously oblique and universally accessible while sneaking into our hearts through our heads and vice versa, it’s the key to why their songs so easily carry us away. Seen another way, those afforded access to that machine’s owners manual are in effect being given a license to charm our pop pants off at will, a habit Mr. X. Heyman has taken a shine to from the very start and one that, as evidenced by new album 67,000 Miles an Album, released on his own long-running Turn-Up imprint Oct 21st, is not about to abate.

With, as always, his wife/full partner/bassist extraordinaire Nancy Leigh intimately in the mix and this time inviting brass maestro Probyn Gregory (Brian Wilson, Wondermints and first discovered by SEM when he played a crucial part in those incredible Granite Shore records), cellist Julia Kent and Chris Jenkins on viola while personally playing drums (his original instrument) and every other percussive effect, ten different types of guitar and four varieties of keyboard, Heyman’s latest is one of those ‘mixed bags’ where everything in the bag qualifies as ‘tasty’ or a ‘gem’ or, more likely, both, an assessment primarily due to the inclusion of three Doughboys MkII cuts and two others Heyman wrote back in 1968 when he was seventeen (!). What’s remarkable then – or not given who we’re talking about – is how well the record hangs together as a singular piece of work.

Opening with “You Can Tell,” one of those early early tracks, we’re enveloped in a prime ELO vibe (the production front-to-back excels, no surprise) before veering quite quickly into an exultant Hollies-like chorus that without warning raises one of those pop shivers (you know what we mean) and from there any and all resistance is futile. The hard shimmer of “Washington Rock,” with its spinet-sounding organ and 12-string Rickenbacker, proves a paean to not only the history of the place just outside Plainfield and its enduring status in the songwriter’s own history as he was taken there as a lad by his dad. Not often for artists of this ilk, the stories and legends both good and ill of this country’s past would appear of particular interest to Heyman as the following track called, well, “History” would attest. Racing with adrenaline, injected with a touch of Country Joe had he materialized as an American Billy Bragg in his scrappier punkier days, it’s a kind of folky speed bomb that deftly carries with it a pop heaviness appropriate to a song that namechecks “Robbie Mac” Robert McNamara in its first line, reminding us along its way of the adroitness Heyman brings to his work.

Thus are we not surprised by the likes of “Crave,” a quick punch of take-no-crap power pop  with clever to spare (“I’m a wanderer prayin’ for his Canaan / I’m a Ricky and I need some ‘splainin’“), nor the poignant classicism of “Plans,” nor the bluesy ‘indictment pop’ of “Sure Fire” that goes from personal to political in three quick quatrains and right there, right there is a kind of bottom line. All these tracks, packed as they are with a nuance that nods to this music’s forebears – including, oddly, himself – while neither pandering nor pillaging, each conveying along their way the push-me-pull-you of doubt and understanding while remaining, as song structures, tight and to the point. Not one off the tracks on 67,000 Miles an Album (a reference, by the way, to the speed at which we’re traveling atop this planet) nudges past the four-minute-mark. Even the set-ending title track – vulnerable, existential, a romper at heart – listed as a sonata and divided into three movements, keeps things concise at a tad over seven minutes and here we find ourselves pretty much back where we started, wrapped in that riddle, that paradox, of pop dynamics. How does one do so much in so short a time, no fat yet plenty of frills trills and thrills, the entire affair composed in some sort of rich and profound shorthand? Well, hell, don’t ask us, ask Mr. Heyman. [catch up to 67,000 Miles an Album and in fact all RXH’s solo releases here]