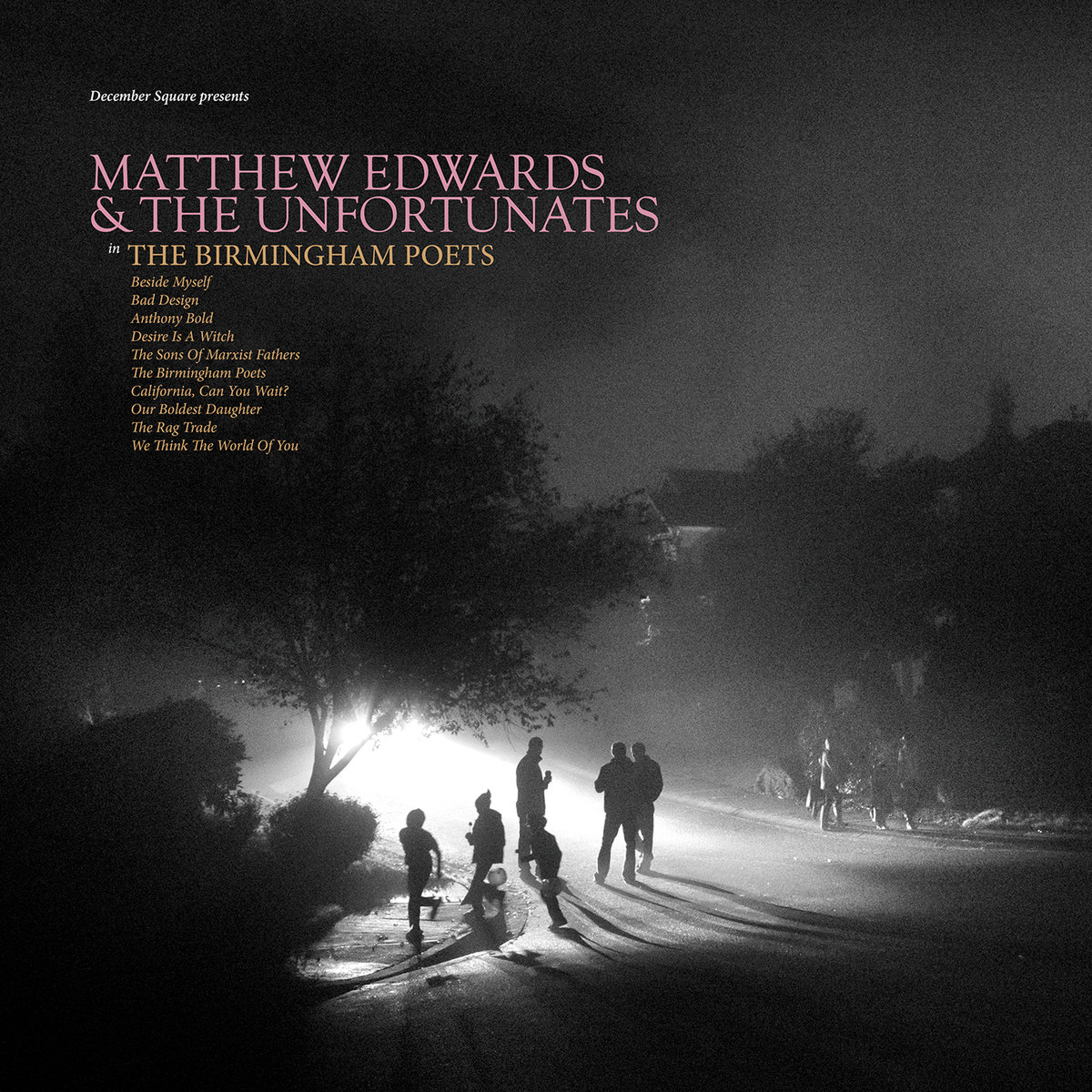 Oh, the questions, those pesky unanswerables. Stepping over the giantest of elephants that lies sleeping in every salon there’s ever been – ‘What is Art?’ is, perhaps, the most banal epistemological feint of all – we’re still left to wrestle, whether we wish to or not, with the (marginally) lesser ones. To wit:

Why do we make art in the first place, an act that, if it’s doing its job, challenges the common everyday world to its face while, behind that same world’s back, deriving most of its material and nearly all its impetus from exactly that colossus of mundanity in whose shadow we labor every day? And how do we persist in that act – and in fact sometimes thrive – even as we’re befallen by personal trauma or private horror or whatever variety of madness that is such that it utterly precludes even thinking about that first question.

Matthew Edwards, with his Unfortunates (Craigus Berry electric guitars, Derick Simmonds drums, Bobby Cotteril on bass, David Robertson keys) doesn’t have any answers to any of that, or at least not specifically. Rather, the work he/they do, dating back to The Fates but especially here on The Birmingham Poets, IS the answer. Through melody and nuance, with wry asides that can pierce up to the fletching and a narrative panache not infrequently bathed in melancholy (an elegant melancholy though it may be), Edwards uses his only superpower – honesty, unflinching, as-he-sees-it honesty however obliquely wielded – to persuade that, despite the odds, there is, in the end and with faith, a beauty – hell, redemption – to be had amidst the inevitable ruins.

As answers go maybe not as robust as we’d like but as a guidepost it’s damnably solid, built as it is on the intuited belief that our stories save us. Doesn’t matter sad beautiful sorry or joyous, they all lend their unique gravity and hold us up, sometimes despite ourselves. Our stories have our backs even when we don’t.

Matthew Edwards’ stories, pitched as they generally are with a dry and charmingly dour English complexion even when fronting the Music Lovers and living in San Francisco (consider a circuitry pulling in wires from John Howard, Paul Simpson and Dylan Thomas, with your obligatory schematic slice of Ray Davies thrown in a half the price, flip that switch and you’ll have an idea), have, perforce, taken a slightly darker turn of late. Since the sublime placeholder Folklore in 2017, both Edwards’ parents have passed while various Unfortunates have faced down serious health scares and other accidents of fate. Under such circumstances ‘business as usual’ wasn’t an option but neither was curling up into an emotional fetal position and hoping the woes would fade away. No, the only way  out – again – was through the crucible of album-making, and, though as catharses go The Birmingham Poets is, overall, an understandably ruminative one, it’s all the more powerful for it.

Now, for those uninitiated, it may appear at first blush that, in the cast of his songs’ style and the tenor and tone of the narratives therein, the singer here is intent on taking the art of soaring self-deprecation to new heights. But we’d rather argue the quixotic opposite, that Mr Edwards is, as it happens, making of the saturnine a kind of slowly unfolding satori, one burnished by the unavoidable sadnesses that lay in our path. The key, as implied on Poets, is twofold: to recognize that the way toward whatever acceptance isn’t plotted step by step but is instead a happening-upon of random clues we’re asked by unseen forces to puzzle together; and that any level of understanding we’re lucky enough to obtain along the way is a gift. Throughout this gently rollercoastering ride of an album, ‘resilience in spite of ourselves’ is, if not exactly the lowest common denominator, certainly ranks as the most necessary one.

Coursing with something of a sumptuous tension, opener “Beside Myself,” vial droll vocal filigrees – Edwards’ relatable tenor floats in a mid-range between plummy and earnest working class – deftly straightforward lyrics and an arch-slash-aching guitar coda, inverts the mania implied in the title until the entendre isn’t so much doubled as turned inside out. Though not a tone that needs setting – this ‘contextual trompe l’oeil‘ business, the empiric vice versing with the confessional, has been an Edwards trademark since the beginning – it nonetheless gives clear evidence that he’s as much in command of his craft as he’s ever been. Which, yes, when discussing a writer of this stature is saying something.

All through the tracklist – the gracefully punchy “Bad Design” (as in its primary, Dagmar Krause-voiced “here we are in the midst of a…“), the ensemble purring both soulfully and machine-like, not least Cotteril’s deftly lunging bassline; “Desire is a Witch”‘s comedic middle-aged pathos from which, prodded by Berry’s snarky lithe guitar lines, the singer discovers the wonders of hard-won acceptance when held up against, shall we say, the creeping ravages; the soft-shoe ce la vie fatalism of the title track, Krause’s wispy husky voice especially effective here; “California Can You Wait” with its slyly anglicized Brian Wilsonisms as if the band (most notably in the form of Simmonds’ Blaine-worthy stick work) were angling to become the new Wrecking Crew – not only is there no doubt that a more Edwards-empathic group of players could never be assembled, it’s equally clear that the man at the mic is near peerless in his parsing of our peculiar species’ gift for equivocation, for its fatally-shrouded optimism that this life we’ve had thrust upon us simply must be something more in the end than a mere consolation prize. Nowhere is this outlook clearer than on “The Sons of Marxist Fathers,” a yearning paean to hope and extinction.

The allegorical quietly subverting the presumed autobiographical – or the other way around, you can never tell with this guy – “The Sons of” is, in any case, The Birmingham Poets‘ tour de force centerpiece, its spirit pulling all this album’s haunted themes to its core before blossoming midway into darkly mellotron’d, heavily power-chorded places, the only sung couplet thereafter – “life is the sweetest thing and here I am / death is the surest thing and here I am – giving little indication of its safe return. That the track reverts in its final few seconds to the calm acoustic strum it arrived on tells you as much as any analysis can about Edwards’ innate – and fearless – determination to search out the very heart of our hearts’ uncertainty and nail upon it his own manifesto.

Matthew Edwards’ instincts seem to have set him, inalterably but not without evident pleasure, on a path whereon he’s forever stuck walking between worlds. Clouds tinged with nostalgia may hover over him on one side while on the other a steeled gleam of clear realism marks him out as an unapologetic modernist. His is the unique ability to leave us with the vision, as the final track hangs echoing in our head with a forlorn avidity, that we’ve just witnessed a heartsick, highly literate roue walk into life from the shadows of a Turner painting just as its current-day doppelgänger is last seen walking in the opposite direction. The result is an unsettlingness of the sublimest kind, and surely, if we want to talk about art and artists, and how the best of them do what they do and have the effect on us they do, there is no better place to start. [The Birmingham Poets can be had on vinyl and CD formats here]