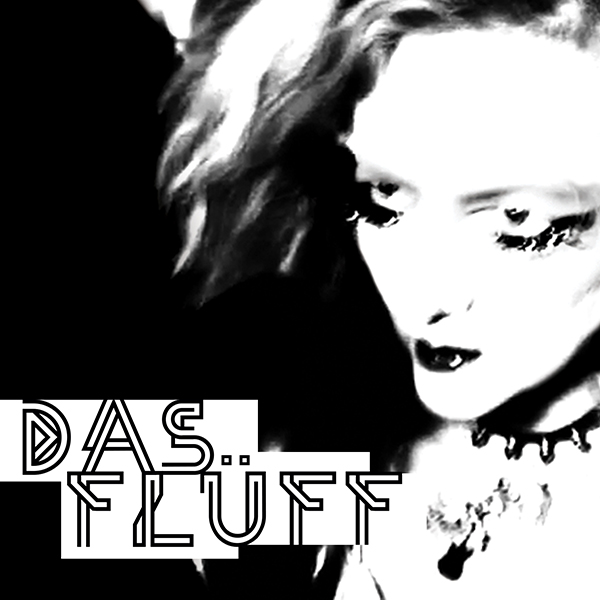 One forgets. Step away for a moment into the broader maelstrom and next you know another couple years have slid into the abyss and a new Das Fluff album in all its post-punked electro-sleaze abundance comes falling toward you from the firmament like a blazing icy comet. Arch, of often unmitigated force, the wife-husband team of Dawn Lintern and Christian Ruland, dba Das Fluff – she composes/conceptualizes the songs (and produces), he helps shape them electronically into life and typically handles artwork – are not a whirlwind you want to turn your back on, there’s something of a sensory command that on LP number four has found its fullest, most confident expression yet.

Centered, as ever, on Dawn’s sparking kaleidoscope of artful furies and fears – deliciously venomous here, pointedly coy there, lurid and paranoid with an often in-your-face seductiveness throughout – there are, also as always with this lot, as few punches being pulled here as you might expect in a neon-lit street brawl. Stomping into your consciousness straightaway on track one with the brash and petulant verve of the unforgiving “Millennial,” Anxiety Dreams unwinds from there in a never-less-than-thrilling blend of primal yin and cerebral yang, in sound and word the band’s mix of lucent intelligence and rutting groove (no matter how subdued, as on the darkly aspirational “Rise”) is never absent nor out of balance. This is their best yet, let’s establish that right now.

In the quietly disquieting title track, its deliberate off-kilter beat and buzzing synth persistence mirroring the song’s take of conformist dread; the predatory anger of “Animal,” its feral rage – barely – contained as if, yes, in a cage; “Obey”‘s retro-chilling warning blast (not unlike a PSA produced by the Stooges) erasing the difference between back-then’s existential unease and today’s, in the positively beguiling “The Cure” (no, nothing to do with that one), a departure that’s just as surely not one as the DNA of this band’s POV is as nakedly apparent as ever, we have Das Fluff at their, well, fluffiest (the band have taken ownership of that word and long ago turned whatever intimation of kittenish innocence on its now-snarling head). Not to jinx their next record or anything but Anxiety Dreams seems in its very essence to be the album they’ve been aiming for since first unleashing themselves on us in 2010 or so. And while it may be at least slightly absurd to say of a band whose rather unlikely past – see this interview from 2013 for background – ensured that they’d be in the mid-to-late 30’s when they launched this project, it’s nonetheless true that on Dreams Das Fluff have matured, in craft, in production, in every aspect that matters.

They key – or keys; it’s two-fold – to this album’s standout success, past that ace production and the at-least-as-ace arrangements over which these songs are draped, is, for one, Dawn’s voice. Her vocals, while always imbued with sufficient presence and allure, here have a feel of residing flesh and spirit inside the lyrics, the line between narrator artifice and real fucking life razor thin enough as to be invisible. Then there’s the band, small as they number, surrounding those vocals.

As they have forever Christian’s synth-born textures and contours are these tracks’ central nervous system, stippling the Das Fluff sound with crucial swoops and washes of atmosphere without which the structure would surely collapse (final cut “Supervolcano” one perfect example if not by any means the only one, its earthy, witchy, moving slow-motion trance not so much a tour-de-force as a tour-de-subltety, a turn of phrase that, if I may, rather succinctly captures the uniqueness he brings). And though they had a change of guitar personnel midway through recording – not counting Dawn’s rhythm work which, umm, remains the same throughout – it would seem they’ve a talent for attracting moth-to-a-flame like super-simpatico musicians, as both departed guitarist Stefan Miβfeld and new recruit Joe Dochterman blend and/or stand out as called for like lifelong members (check the latter’s work on “Millennial,” as precisely compressed as it is unhinged, the former’s deranged Frippery on “Freaks” and you’ll see what we mean).

Though by necessity run lean as a unit – there’s something of a fierce scrappiness that seems to drive them, a hunger that’ll never leave – Das Fluff, come Anxiety Dreams, have learned a version of ‘economically expansive’ that not only suits their aesthetic but defines it. More than that, though, it’s the exact crux of the tension that keeps them alive. The effect on you, new listener or old, is a quickening of the pulse and an inveterate smile of satisfaction.

However dark they may some times be, however ecstatic or fraught, you’ll recognize your own desires in these songs.