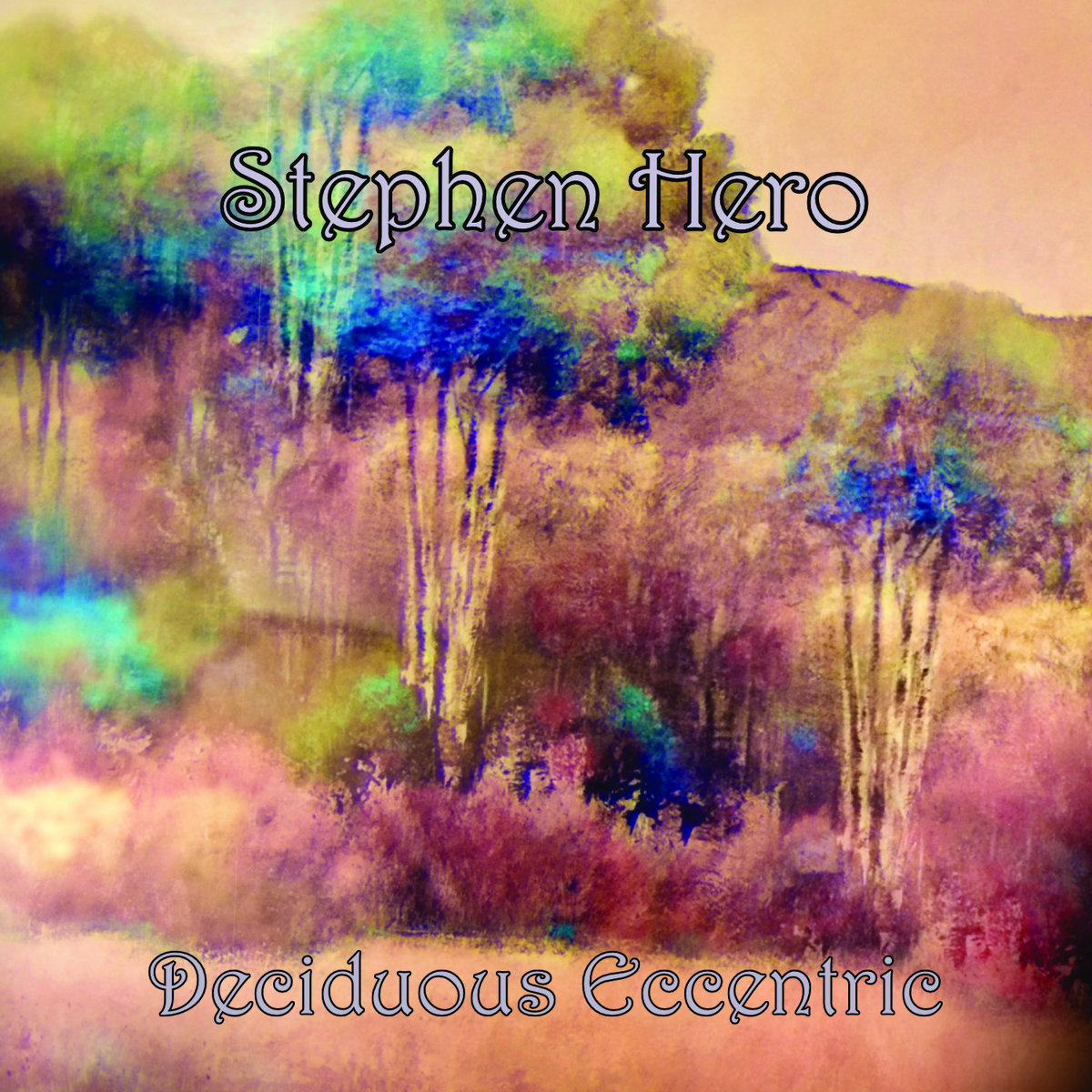 It can’t be possible, it isn’t possible, and in fact, as a concept, it must almost certainly invite such disbelief and outright incredulity as to reduce the phrase to little more than an unfortunate bit of linguistic gimcrackery. And yet, and yet…in the case of Patrick Fitzgerald, the man behind the Stephen Hero persona, based on the work he’s produced over the past three decades since first emerging in the late ’80’s as the bass player, singer, and primary lyricist with Kitchens of Distinction, the presumed absurdity baked into those initial two words up there gets turned decidedly inside out as the challenge becomes disproving them. It’s a task made all that much more difficult with the arrival of Deciduous Eccentric, an album determined by its author to be his last, or anyway the last insofar as the slowly eroding record-release-promote model is concerned. In its quietude and fortitude, it’s an astonishing work but then, looking back, who’s surprised.

There was, after all, in the ethereal but oh-so-real work of KoD, a quality so immediate and lasting, so delicate yet tough as tungsten wire it could make one care about music nearly as much as one cared for oneself, a response that in turn might well lead a listener to a more honest, unmasked relationship with their own vulnerability, a result which, irony be praised, can only make a person stronger. That’s a lot to attribute to any work of art, not least, of course, quote unquote pop music, but then again, we’d argue, it is exactly that innate transaction that underlies every fervent declaration however articulated of ‘music saved my life.’

That point made, it would naturally be tempting to draw a kind of holistic parallel between Fitzgerald’s intentions as a songwriter and the many years he’s spent in his real-world job as a doctor (a career put on hold when KoD formed). But I hesitate, not so much because it’s reflexively facile but rather because one suspects with near certainty that the creating of that music that has provoked and soothed and above all sought to extract beauty from the complicated business of living – there’s often a shimmer welling just beneath the surface of his songs that might suggest a touch of escapism except for the fact it’s most often caught in the teeth of reality – has been at least as therapeutic and necessary for him as it has for his audience. Whatever the case, this swan song, shining inside its ruminative husk, its autumnal shadows cast by the inextinguishable flame that flares despite the uncertainties of the artist that lights it, could hardly be more svelte of line nor, well, poignant of verse.

“The Green North,” opening, looms gently into view with a shiver of strings and a piano melody both sprightly and mournful. Full of everyday reverie, over-spilling with wondrous night-lit imagery like an English Rousseau that was born a songwriter, on just about any other record it could well be considered an odd choice with which to set the album’s tone but for Fitzgerald’s purposes here this piece of fluid bucolic poetry, serving as it does as a eulogy/tribute to all things (and people) floating behind him in the distant-but-close, gone-but-not-gone past, it’s essentially a mission statement.

“Colin,” Semay Wu’s cello yawing in all its sorrowful grace, the tentative empathy of an electric piano clutching the melody like a string of pearls, paints a portrait of “the girl in white tonight [who’s] tomorrow a boy once more” with such vividly  human warmth it’s nearly impossible not to summon her yourself, the mirage of an aging debutante queen made flesh before your inner eye. It’s an evocativeness which, rather inevitably given its predominantly elegiac mood, permeates the whole of Deciduous Eccentric. Even the jauntier “Fly A Rocket,” a track that begins with a “Day in the Life”-like string passage before calling up Brian Wilson’s teenage ghost (“Captain, oh captain, hoist up the John B sails“), emerges from the mist as a largely existential outing, the narrator’s viewpoint tacking darker as the voyage drifts later into the day (“Captain, oh captain, help me wear the skin of a wiser man“). It’s a parable that hardly needs unpacking in the context of this record, delivered with what might well be called a fragile complexity (or perhaps an understated richness; there’s an underlying layer of detail to it that exhilarates with its subtlety), the track’s arrangement built on shifting, sleight-of-hand movements that leave one slightly off-balance and fully riveted. Quite the tour-de-force for what at first blush would appear, in most respects, a quiet albeit sublime slice of baroque pop. But then again, that’s an observation that could credibly be applied to the whole of this album.

Consider: the keening sonority of “Gunshot in the Fog,” raining piano throughout and drenched in longing; “Patient Here Myself” stepping gingerly through its clever autobio construct – Fitzgerald the doctor has found himself, with due concern, on the other end of the stethoscope – the lightness of its touch feeling nonetheless fraught as the piano and Will Fulford-Jones’ violin dance each other down the linoleum hallways (“Skinny Cupboard Pill Boy, immediately in its wake, could be heard as “Patient”‘s crepuscular echo); the wintry, lovely closer “Don’t Say It’s Too Late,” its often-sharp lyric (“the seesaw dishonesty, Bacardi and gin / come home loose-tongued, expecting a grin) held in deft check by Nyro-esque piano and a trembling bow, the singer pivoting in its final minute toward a softer exit, to accept with last testament finesse that while there be plenty of pleading there is in the end no actual bargaining.

All these and the rest – and “Stripping Oliver” should not go unmentioned, the beauty heartbreaks its sparseness – while passing with the mortal fleetingness of a valedictory address, a seasoned musical diary entry meant for all to hear, produces a cumulative impact beyond the sum of its individual tracks. It’s in this way that, beyond the eloquence of its frankness – a longstanding Fitzgerald trait – one can trace a reverse arc from this farewell suite of darkly pastoral songs to the slicing, chrome-plated pop of, say, “Railwayed,” an arc fashioned from exactly the same daring honesty of purpose and reflex for the timeless melody on display here.

To be certain, as living elegies go, Deciduous Eccentric is an edgy one, no punches pulled, the squint into the coming night unflinching. Despite (and, yes, because of) this, there’s an aching joy to bear listening witness to an artist of this candor lay the capstone on what has been a lucid, compelling career. Born poignant? Well, maybe maybe not whatever, but Patrick Fitzgerald’s body of work over these past three decades, put to beautiful and restless rest by this intimate, richly brocaded final statement, has little parallel.

SEM: The most striking and immediate line in the press release for Deciduous Eccentric is of course the one that begins “For his final album…” Those are four weighty words with a lot to unpack. While the span of your musical career from the release of Kitchens of Distinction’s Love is Hell in 1989 to DE here in 2019 provides the built-in ‘advantage’ of a nicely-rounded chronological hook to hang a retirement date on, there’s obviously a whole lot that factored in that decision. Could you give a quick (or not-so-) rundown of those factors, knowing that there are a lot of us out here that receive that news with a bittersweet pang of melancholy?

PATRICK FITZGERALD: To misquote Orson Welles, if you want a happy ending you have to know when to stop the story. 30 years of doing recordings is part of the reason to stop. The bigger issue for me is what has happened to music in that time. What’s a record for anymore? I can’t remember the last time I bought a record. I buy downloads, but oddly it’s not the same for me. I think this isn’t an issue at all if you’re younger and come into the musical landscape as it stands. Spotify is fine and amazing, yet requires no emotional investment. You can have whatever you want, whenever you want, but you don’t necessarily know what you want because you can’t find it. Conundrum of plenty. A close friend left her work in theatre about 5 years ago, sensing that it had lost its way for her. All this effort, the huge resources, for what? She passed on Suzi Gablik’s books The Re-enchantment of Art and Conversations Before the End of Time. Lucy Neal’s book, Playing for Time, Making Art As If The World Mattered. Confrontational books, asking why are you doing what you’re doing in these times of extinction? Repetition of format and ease of production is not the answer for me. Having made what I think is my favourite and most honest record, it’s a time for reconsideration of what I’m trying to make/say/do. In other words, shut the fuck up, Patrick, and find a new way of telling your stories. I currently have no clue what that might look like. There is something about making music without electricity, without resources, in the dark, that appeals to me. Which means not recording it. I can’t twist my way out of this paradox, so I’m stopping, looking around, waiting for a bolt of inspiration. This may take a while.

SEM: There is, I feel, a twist of irony in the fact that the ‘wonder’ of the internet age has devalued to near zero a vast swath of creative endeavor at a period of human history where there’s a more-than-remote chance that civilization is hurtling toward a period wherein they’ll have no choice anyway, as there’ll be no market to speak of except the black market. I mean, should that be the case at least artists will be accustomed to financial privation. Have you thought whether you’d have made this ‘final album’ decision had the environment (literally and figuratively) been more artist-friendly and sustainable?