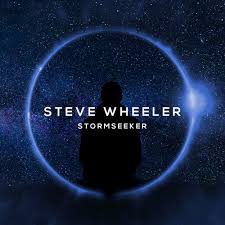 It’s hard not to immediately notice that Steve Wheeler is a virtuoso.

All it takes is a note or two from his upcoming debut album Stormseeker and you’ll know instantly that Wheeler is one of those rare composers who can pretty much do anything.

But for his debut album, Wheeler didn’t want to just do anything–he had some specific things in mind. A blazing tour de force of classical music and metal, Stormseeker is an album of compositional complexity and musical virtuosity that makes you wonder why you’ve not heard of Wheeler before.

You might not know the Cape Cod-born composer by name, but you’ve certainly heard his work over the airwaves for CBS Sports’ presentations of the PGA Tour, NFL Football and the NCAA’s March Madness. In fact, Wheeler’s work as a media composer has found him to be one of the most prolific in his field, but that’s only a percentage of his true artistic vision.

That vision is best on display with Stormseeker, a dreamy blend of metal, jazz and cinematic soundscapes that are redolent with texture, depth and atmosphere. The title track itself is a symphonic battle march that comes replete with driving percussion and a loop-fueled underwater breakdown. Meanwhile, “Seas Of Blood” is a whirling blend of classical and metal set against a dramatic dreamscape of crashing cymbals, while “Destroyer Of Worlds” builds into a beautiful confluence of chaos and order and resolves itself in a mesmerizing crescendo.

An ASCAP Foundation Henry Mancini Music Fellow, Wheeler’s orchestral sense brings to mind Mancini’s best work. Like Mancini, Wheeler has a deft touch and his compositions are brimming with ideas that are not only executed with dexterity, they’re played with passion and heart.

The crushing “By The Fire” is nearly three minutes of sheer musical finesse; “Unearthly Mover” soars with Goth-tinged textures, and “Until The Light Leaves Their Eyes” is ten minutes of orchestral perfection. It’s got a dreamy center, darkness in the corners and light all around it. It’s perhaps the album’s most subtle track, but it’s ending summons the image of walking a tightrope over a sea of fire.

And there’s nothing subtle about that.