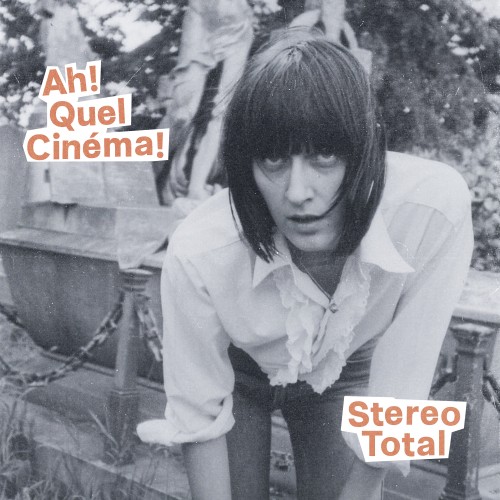 OK, look. Any band sufficiently endowed with such an intelligent depth of quirk as to inspire the author of their one-sheet to quote Flann O’Brien not only has this writer’s instant attention but as well his likely undying affection. Though not previously thought of, if anyone could soundtrack a filmic adaptation of At Swim-Two-Birds (head-spinning proposition though that is), it could well be Stereo Total.

By this point, as they roll through their eccentric paces on album number dozen (Ah! Cinéma!, released July 12th on Tapete), the bouncing (now middle-aged) enfants terrible that comprise le Total – Francoise Cactus and Brezel Göring – besides being long-time believers in putting the sublimely bonkers ‘pseudo’ in pseudonym, have minus zero fucks to give (seeing, you see, that they began with the sum, um, total of zero in the first place) when it comes to units shifted, expectations met, critics dazzled, genre alignment (pfft! especially that), or, for that matter, any adherence to any manner of pop structure per se, which is largely why, quelle surprise, they’re so damned good, so damned loved.

Like the house band at the Asylum for the Musically Mischievous, Stereo Total, it could be said, are daft the point of genius. Yes, there is, to use that old saw, ‘method to their madness,’ but said saw loses a bit of its bite when one considers that, in their uninhibited versatility, their casual/serious virtuosity, in their weft and weave, it’s hard to argue with the conclusion that a canny madness is their method.

Proof? No problem. Who but the brilliantly off-kiltered could slide as easy as a greased trombone from a playfully deranged komische – album starter “Einfach,” Francoise’s shifting franco/allemande vocal scooting along a groove so motorik it could conceivably give you the autobahn verison of highway hypnosis – to perky new wave Europop (“Ich Bin Cool”) that finds the duo impishly hijacking “Ca Plan Pour Moi” and sneaking it across the border in the trunk of a stolen Peugeot, to the mellow hell of something like “Methedrine,” a depiction of addiction (sung in English) that floats over you like a seductive confession, wobbling with a dark grace between sounding somewhat sunny and absolutely utterly lost? The rhetorical answer to that rhetorical question is a quick ‘no one, really’ and certainly no one that can accomplish it with this pair’s level of fiendishly self-contained aplomb.

Now, should much of what’s just been said here make it appear to potential new initiates that Stereo Total is some kind of dual vanity project that can’t help but entertain their every self-indulgent musical whim as if they’re a novelty act that’s managed to last a quarter century, allow us, please, to disabuse you, at least somewhat. Not unlike a continental, more music hall version of Half Japanese, the power in this band’s creative work often lies curled up beneath the supposedly disposable nature of a sound that can present like a sort of European folk art (partially performed at times on toys and salvaged instruments), ready to spring out at you at any moment. Which is to say a darkness may well at times prevail (beyond “Methedrine” check out “Dancing with a Memory” that tackles the anger of loss with a tellingly escapist funk pop groove, or the self-explaining “Elektroschocktherapie” wherein a child’s plinking piano has never sounded quite so devastating) that not only freights this endeavor with enough of the human quotient to make the Stereo Total experience one of the more memorable – and meaningful – carousel rides you’ve ever taken, but as well makes the word ‘irreverent’, as applied to their work, wholly irrelevant. Madness as your method? Sounds a lot like life itself, don’t you think?  [make your life complete by ordering Ah! Quel Cinéma! here]