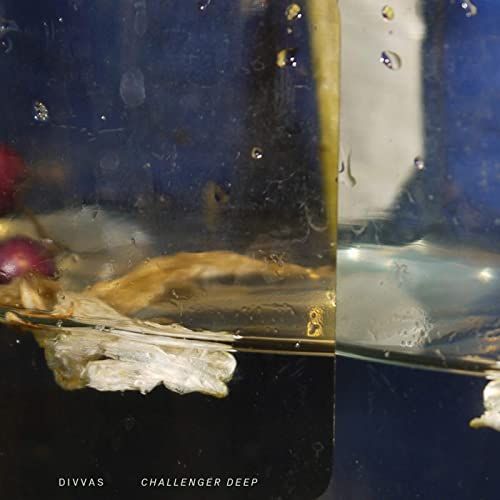 Challenger Deep, the new EP from Swiss slowcore project operating under the name DIVVAS, is as powerful a document of a self-willed descent into the unchartered parts of the human psyche, as any of the cult titles from Japanese author Haruki Murakami.

Their music is mysterious, meandering, labyrinthine, dark, and full of enlightening surprises. The duo consists of Corinne Norah and Dave Eleanor, who share vocal and instrumental duty on these songs. They recorded this material during an intense week-long session in London back in the summer of 20019.

As the story goes, they were churning out songs ‘round the clock, in somewhat of a trance-like state, and only took short breaks to grab something to eat. You can feel this manic energy throughout the EP, and it’s one of the many things that make it so alluring.

To get an inside scoop of what it was like to get wrapped up in music like that, we sat down with the duo for a brief Q&A:

Stereo Embers Magazine: Hello! It’s super to connect with you both. Let’s start with the recording session for your new record. It must’ve been pretty intense!

Dave: It was, yeah! The studio session was actually the first real-life collaboration since we met each other;everything before that ran over the net. I was getting sick and Corinne had to sing these lyrics from her heart, for hours, which was certainly rather exhausting, considering the topics. (laughter)

SEM: Did you crash when it was all over?

Corinne: Oh yeah, I did! On the last day we also had this photo shoot, and we needed to get up at 5:30 in the morning to stand around in some empty fields in the countryside, at sunrise. We almost didn’t sleep at the end of the session, for days. I also had to travel with lots of luggage and instruments after that week. So when it finally was over, I literally could barely walk anymore. I never experienced anything like that. My body was so tired.

SEM: Are the two of you always this manic when it comes to making music?

Corinne: Because we work from two cities – London and Zurich -– our meetings and sessions are always very focused and intense. But we kind of like that, it really feels like a deep sea dive into our music.

Dave: I make music almost every day, sometimes throughout the whole day and into the night.  Sometimes it’s deliberately crazy; sometimes I’m more pragmatic. But I like it a lot when it doesn’t feel like a job, but like an expression of passion.

SEM: Your sound is very eclectic, ranging from improv-jazz through bass and IDM music. Is this eclecticism a reflection of your individual music backgrounds and how different they are?

Corinne: I think it is, yes. We combine a vast range of musical influences from improv-jazz, singer-songwriter stuff, electronica, and UK bass all the way through to classical music. The different backgrounds sometimes make it hard for us to agree on where we want our music to go, but in the end I think that this is exactly our strength, or what makes our music so unique.

Dave: Is it really that eclectic? For me, it falls somewhere between that future R&B and some lo-fi electronica. But, of course, I am absolutely not objective with this.

SEM: Why the title Challenger Deep?

Corinne: The Challenger Deep is the deepest known point in the Earth’s seabed hydrosphere. The depression at the south end of the Mariana Trench in the Pacific was named after the survey ship HMS Challenger that made the first measurements. Similarly to a submarine, we want to explore the most unknown point in the human psyche and see what we can find. Maybe there is something in us that is like what you would find in the deep sea, with all the crazy microorganisms which live in a somewhat of a parallel universe to ours.

SEM: It’s a very evocative title and it captures this zeitgeist faithfully…

Dave: Yes, we shouldn’t forget the political aspect of all of this. Challenger Deep is definitely a record with a clear political stance. We contribute to the big picture with subjective images.

SEM: Can we expect more music from this project in the future?

Dave: Certainly. We are already working on it. Thank you for the interest!

Find out more about DIVVAS: