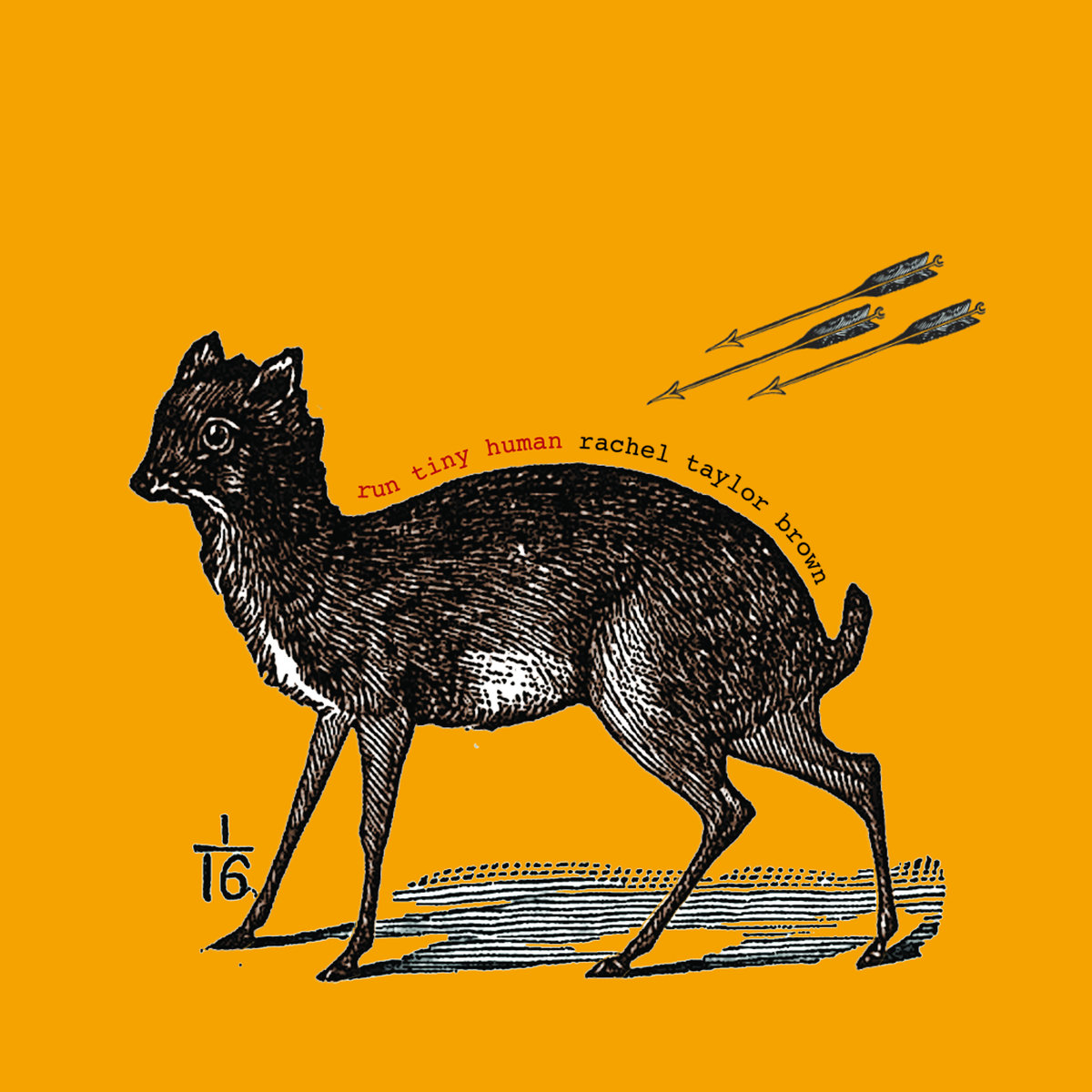 Possessed to the point of being, well, possessed by a singer/songwriter’s most crucial qualities – the dual whammy genius of an abyss-deep well of honesty alongside a style of personal craft that kind of takes the word ‘unique’ to a sublime extreme – Rachel Taylor Brown is an outsider artist that’s so inside the collective psycho-political zeitgeist it’s somehow both amazing and not surprising that everyone that woke up conscious this morning isn’t aware of her. That fact makes me, a mere fan (and, OK, something of a regional partisan; she lives not too far outside Portland), emit a too-familiar sigh of despair, lamenting terribly reality’s heartless caprice. Ms Brown, however, while struck by similar emotions regarding the wider state of things – evidenced by Run Tiny Human‘s overall tone and her stated state of mind while making it – if not impervious per se to this size-of-talent vs. size-of-audience disparity, is clearly not paralyzed nor, it would seem, particularly discouraged by it seeing that this is her tenth full-length and defensibly her best.

Gifted with the idiosyncrasy that arises when the hampering specter of self-doubt in what are, in fact, extraordinary creative instincts meets a recklessly defiant drive to get them out there anyway, the work that Rachel Taylor Brown produces takes that glow of fragile stubbornness and lets us all bask in it. If what one takes from this is that as an artist she’s the open, generous sort with a perspective sharp enough to slash your tires then I suppose I’m doing my job. Put far more simply, there’s really no one like her, she’s like that exact inflection point plotted with a blind-luck precision midway between the naif wisdom of the Shaggs and Joni Mitchel with her knowing Mona Lisa smile dancing somewhere on those hissing summer lawns. You’ll pardon me if that’s a clumsy attempt to situate her on the Incomparable Song-Maker Spectrum® – feel free to add to those co-ordinates a spot of early Ariel Pink or Kristin Hersh fresh from listening to the Free Design – but at least it shows how, for your sake, reader, I’m trying, and how tricky it is with a songwriter of this stripe, this bent, this bendy stripe. To simplify (which is to say ‘complicate’) even further, Rachel Taylor Brown is folk, she’s rock, she’s angry and snarky and vulnerable and brave and basically just all over the place all at once in the most marvelously centered off-center way. The work here will likely knock you blissfully sideways and you’ll love her for it.

Though a cumulative, invited pick-up band of sorts helps flesh out many of these tracks – that ‘band’ comprised of the likes of Jeff Stuart Saltzman (recorded and mixed the album as well as providing synth and mandolin and other et ceteras), Jeff Langston on bass, Leigh Marble, Mark Powers and others – the bulk of Run Tiny Human‘s songs are piano-based which, aside from reflecting how they were no doubt conceived, lends them an intimate immediacy that grounds the album in the personal. In most instances, no matter what’s going on around it, that presence, delicate and solid as only a piano can be, sounding simultaneously lonely and reassuring, is the anchor in the various intensities of storm that can range from the soft to the furious, from the bluntly enigmatic to the slyly direct. Whatever a particular track’s impact, one sees in the mind’s eye just inside one’s headphoned ears, the image of Ms Rachel Taylor Brown hovering above the 88 keys like an awkward chanteuse joined at the hip to her soliloquies. And my, how cannily oblique those soliloquies are, making sense out of the so-called real world by coming at it with a cipher of knives.

In the twitchy thud of “Gitcher,” a flagrant (and decidedly not piano-based) poke-in-the-eye welcome to this region’s still-ascendant steroidal piggy capitalism, in the lovely Carole King-with-a-trill-of-sarcasm of “Portland,” its follow-up “Maker” that despite its jaunty light prog-pop appearances dispenses with sarcasm and goes straight for the ‘creatives” shameless jugular, “God”‘s sweet but dire ambivalence that’s as moving as anything I’ve heard since The Revolutionary Army of the Infant Jesus, being, as it is, a prayer into the void, in the equally shifty “Wonderful You” that at first blush is a pinging straightforward piano confessional of sorts until a closer listen reveals it to be something more akin to a memorial mash note written with a poison pen, it can feel as if we’re being made to bear witness to the naked vibrating static of simply being alive in our human skin. Though Brown’s been here before it still must be stressed that this is no small achievement for someone that’s often found sitting on a bench staring down at a Baldwin or whatever. Those tracks (and others), it could be said, hit the nail on the head about how truly impossible it is to hit the nail exactly on the head when we’re talking the human condition. Everything moves with every breath and, as is well known, uncertainty is our only certainty and possibly the only friend we have to confide in.

Now, we could end here. Any artist whose work leads a listener to thoughts as just expressed – and has been doing thus for half a generation – isn’t in need of any over-belaboring. But, you see, I’ve left the best – or at least the most astonishing – for last, not simply for rhetorical effect but also because it quite probably says ‘the enduring contradictions of Rachel Taylor Brown’ with as much expansive accuracy as anything I’ve heard her create.

Riding in on a lively plinky piano run that rolls with a mad McCartney/Kevin Ayers pop insistence, “Little Gyre” proceeds to pound out the tale of a body of orbiting space junk falling for the island of debris swirling (just as it does!) in the Pacific, falls so hard in fact it plunges oceanward to be united in a state of holy wedded abandoned-garbage joy. While what is written right there and read on that flat screen you’re staring at as a simple description may sound perhaps unbearably cute, “Little Gyre” in real life is a beast of a far more conflicted kind, its inspired whimsicality – and come on, who else would’ve thought of this? – is of a piece with the heartbroken anger of the lost and forgotten figuring out a way to have the final say. To hear the singer, punctuated by Marble’s incendiary lashings of guitar, speak-sing-yell the line “nothing in heaven tells me I can’t get what I want” is to hear not only those sly Brownian extra layers of meaning but also, more to the point, the sound of a tongue that’s been bitten pretty sharply a time or two before being tucked into its waiting cheek.

In attempts to encompass the work of this Ms Brown one ends up concocting phrases like ‘the pitch-perfect imperfection of life itself,’ which begins to but doesn’t really begin to explain what’s going on here. Which is why we listen to her records instead. So do that. Start with Run Tiny Human. Then go forward by going backward, a direction that’ll make some beautiful sense to you once you’re underway. We promise.

[get Run Tiny Human and all things gettable byRTB here]