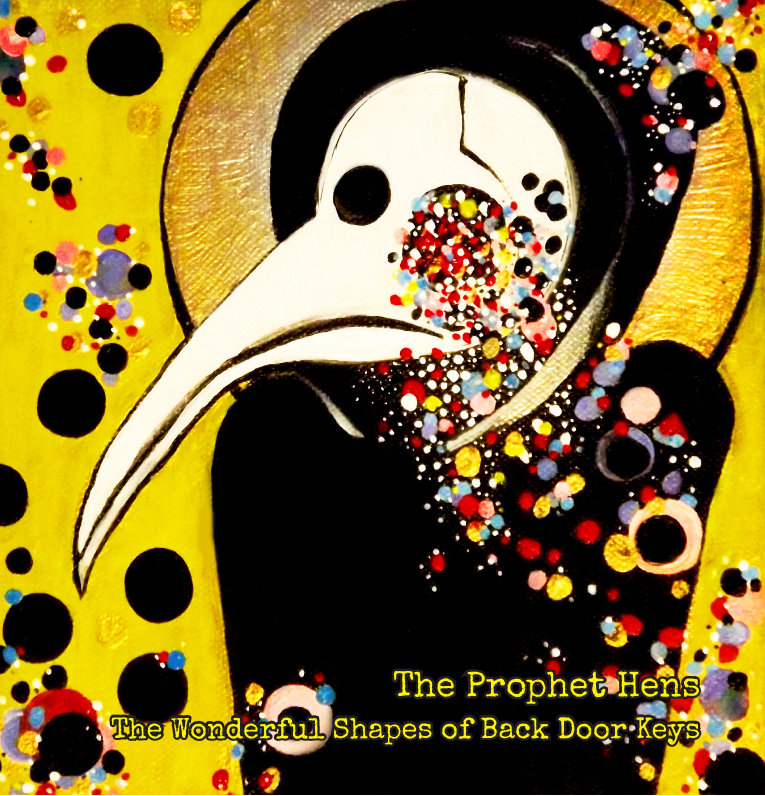 One of the more fascinating aspects to this music writing gig, at least to a certifiable geek such as myself, is the frequency with which unexpected discovery suddenly unfurls in front of you. Here you are, thinking you have a pretty firm grip on the gist of what you’re listening to when, out of somewhere left of left field, a bolt of innate understanding theretofore withheld strikes the path in front of you and for an everlasting instant a new shred of truth reveals itself with glittering clarity. Epiphanies of a sort, the most effective of them are profound in their simplicity (realizing, for instance, that it’s the delicate melodies buried like filaments inside its massive sound that keeps a Destruction Unit track upright), resulting in that type of zen moment that makes you exclaim both “Duh” and “Wow!” simultaneously. And sure enough, just now, innocently spinning the Prophet Hens’ wonderful second album (wonderfully titled The Wonderful Shapes of Back Door Keys), it’s happened again as this simple nugget came tumbling out of some cluttered corner of my brain: There’s a lot of busy in that jangle.

As anyone that knows them knows, a preternatural talent for a certain by-now renowned Kiwi catchiness is a given when it comes to the Prophet Hens and that aspect, quite naturally, tends to stand out front of their songs in suitably bright pastel colors waving its arms in a faux-shamanic dance to the pop gods, as the overall-ness of the whole is distilled into a single sharp point filled (most often) with ringing glee and buoyancy. It is, in a word, unmissable, like squinting your ears at the world’s most ecstatic glare ever. Step back for a moment’s perspective, however, and a swirl of tributaries comes flooding over the transom. The Hens’ older Dunedin cousins are unsurprisingly folded in there but the band seems to cede much greater prominence to predecessors across the seven seas both near and far.

Thus, chiming into the mix at various points and to varying degrees (and of course overlapping pretty much everywhere) you might catch wind of mid-career Feelies (it’s those double-tracked guitars in their ever-present state that we shall call a ‘slowed-down frantic’ – check especially “Oh Wait, It’s Me, Isn’t It”), the lingering drone aesthetics of the Velvet Underground (“Good Shadow” not the least but with little exception there’s an album-wide presence), the Byrds at their poppermost as filtered through a fresh antipodean prism (“Only One”), a good strong sip of the Go-Betweens (“Drunk In A Park,” one of bass player Robin Cederman’s compositions that have keyboardist Penelope Esplin singing lead, a new wrinkle for the band and a good one indeed), and, I swear, a touch of Television on the atmospheric moonlit “Heavy Blossom,” all these inputs melting themselves down into a singular silver template that none but The Prophet Hens have proprietary access to.

Aside from the confusion-begging fact of its chorus echoing exactly the title of the band’s first record, the most whistleable and subtly intense example of this giddy coalescence might well be “Popular People.” Lashed to a Chris Butchard high, dry snare – its snap a constant on Wonderful Shapes – the track’s perky melancholic drift, the way the playful counterpoise of Karl Bray’s dusty jangle of guitar with Esplin’s lowing, cutting-in-and-out organ, which at times sounds like there’s a fairground in the background, are braided together toward the end in an understated frenzy, and, above all else, a chorus hook that will hang tenaciously from your pop memory’s rafters for days if not weeks, “Popular People” is emblematic Prophet Hens, a statement, in their case, synonymous with the type of timeless Kiwi goodness that has become legion over the past thirty-odd years.

Soon to be released on the ever-fertile Fishrider/Occultation axis, The Wonderful Shapes of Back Door Keys is another vivid feather in that partnership’s already plumage-stuffed cap. 2016’s been a rough year so far and it’s barely half over so let’s thank the fates and the Prophet Hens both for bringing us this pure hit of solid – if astutely restrained – joy.

[you can buy The Wonderful Shape of Back Door Keys here and meanwhile here’s a sample of how they sound live:]