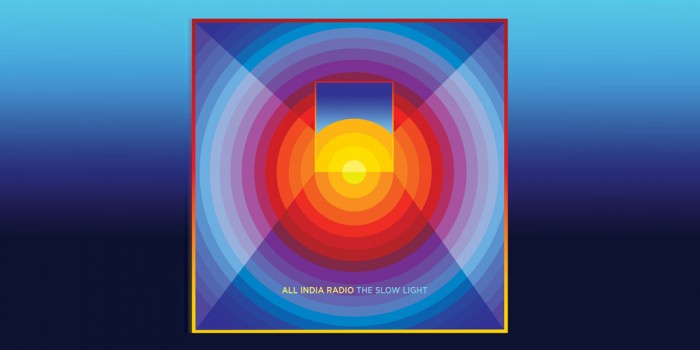 You may not have heard of All India Radio but you’ve heard All India Radio, as the shimmering chillgaze soundscapes of Martin Kennedy – whom you may know from his collabs with Steve Kilbey – have backdropped scenes from CSI: Miami, The Lying Game, Emmerdale and many other mood-dependent productions. It’s understandable, as any director in need of thoughtfully intriguing sonic atmospheres containing emotionally visual multitudes should by default turn toward All India Radio. Gamuts are run here, from the eerie to the spectral, dewy to Saharan, sunrise to dead of night, and it is Kennedy’s genius to coalesce these fleeting and sometimes contrasting textures into single billowing sheets of heartfelt extravagance. On The Slow Light, circles are indeed somehow squared (or, more likely, the other way around) as the ethereal is grounded in the primal, the cerebral in the instinctual, and really it’s not my intention to resort to the rosy abstractions of mere words but the work Kennedy does as AIR (ahh, how often the sly truth of an acronym) rather reflexively provokes flights of flailing journalistic poetry. One settles in, hits play, is instantly enveloped (opener “Blueshift” seduces a la Floyd’s “Shine On You Crazy Diamond”) and before one knows it finds oneself tripping along inside a tumbling spell of dreamlike evocations and cinematic glimpses as the poor pen does its desperate best to keep pace. These are the most sublime, mindful stupors I believe I’ve ever been in.

The vaporous “Dark Star” (no, not that one) floats atop what may well be the universe’s own bass tone (you know, the one upon which all existence is, um, based) and distills a suitably dark glow from the languid godlike tempo and a sensurround of synth figures that pull the drift of melody into the ether. “Can You Hear The Sound,” transfixing vocals by Selena Cross, is New Order in a meditative trance so deep they emerge on the other end transformed into pure light; “Sunburst,” at the very first, actually suggests to these ears a curtain of gentle mist until the shine of a reverberant acoustic breaks through with a glistening serenity and gathers about it some ghostly white synth and evanescent vocal effects, in the process becoming the sound of an epiphany on the Gold Coast; “Twelve” embroiders its basic repeated 8-tone piano progression with enough distracting beauty to soothe every savage beast before being chased at its heels by the album’s most uptempo outing, a prescription for movement called “Time” that would seem to be aiming itself at an elevated cosmic dancefloor, all nimble-as-f*ck bass funk and space-age synth syncopations that Cabaret Voltaire or Chris & Cosey wouldn’t have minded stumbling upon back in 1983.

The Slow Light was four years in the making – it’s also All India Radio’s tenth album and yeah, once again, where have I been? – and Kennedy’s meticulous dedication is everywhere evident, not least in how the record’s holistic sensibility is maintained front to back. As appreciable as the composer’s ability to produce a piece of work that so deftly interweaves the otherworldly with the solidly terrestrial may be, preserving his focus during what was in effect a 48-month (and likely much-interrupted) vision quest is perhaps the greater achievement. The calm intensity of that sustained effort saturates The Slow Light at every turn. Terrific work.