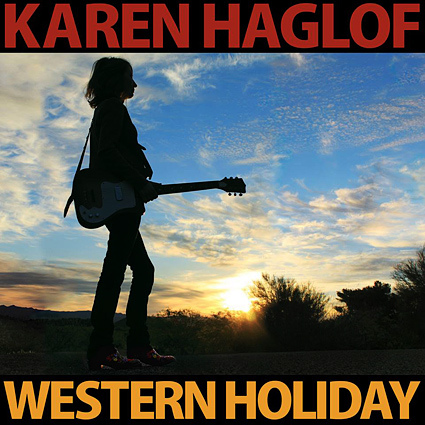 The city/desert divide/mesh is evident straight off on former Band of Susans guitarist Karen Haglof’s new debut solo album as the opening title track blossoms from the bluesy urban shadows into the wide-open sun-baked vistas in the first couple of bars, the NYC-via-Minneapolis singer giving tribute to guides she’s ridden with in recent years out west while simultaneously revisiting her horse-riding childhood with her father. Equal parts swagger and a certain side-winding respect, it’s a warm, tough-edged welcome to a record very few – not the least of them Haglof – would have seen on the sagebrush-dotted horizon.

The quaulifier ‘long-overdue’ precedes the word ‘debut’ on the publicist page that came with this album, a term that rings as a somewhat hopeful misnomer. After her years of fervent activity in both her hometown and adopted metropolis, slinging guitar in Crackers, the above-mentioned Susans and alongside composer Rhys Chatham and painter/sculptor Robert Longo, Haglof chose a different tack, actually taking the path not taken and becoming a hematologist/oncologist now practicing out of NYU Hospital. Not many find their way back from the other side of such a decision but for Haglof, in 2009, a couple of events prompted reappraisal. First was the sudden passing of longtime friend and guitar mentor Jeff Hill, a constant inspiration to her that had always stayed in touch and had, as she says, encouraged her to “pick up old interests beyond a workaholic medical career.” Between that great loss and the demands of a job that often requires her to break bad news to patients who thought they’d have plenty of time to realize their plans, the impetus for this album was assured. The direction came from the release that same year of the movie It Might Get Loud, Page and the Edge tweaking original creative impulses, the presence of young spark plug Jack White, whom the out-of-touch Haglof hadn’t seen nor heard before, proving to be quite the revelation. 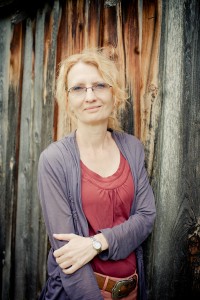 Hence the guitar work on Western Holiday. Even when the tracks occasionally plow a dusty furrow redolent of that album title – the sundown saunter of “Don’t Straddle Fences,” the fetching, driven title track, “Demon Soul Clap” with its back porch songwriters circle vibe – the record redounds with quite the edge, if you’ll pardon the unintentional pun. It’s clear, from the content here, why Haglof was so eagerly welcomed in such a variety of camps back in her original playing days. So, yeah, on a straight narrative track like “Saddle Bronc Rider/Barrel Girl,” title aside, you’ll hear some Chicago alleys running through the baked arroyos. On others, the energy rides in the opposite direction, a sense of openness and range insinuating itself into what appears an otherwise urban lament, such as the pain- and age-defiant “Righteous Anger” that sounds like the Pretenders grinding it out on a muddy delta somewhere, or the serrated pop’n’blues roll of “Danger Point” that despite its fusion of recklessness has a jangle dangling down by its side, the tambourine seemingly impersonating spurs. Whichever way the crossover crosses, it’s a rich duality that serves the guitarist’s return to the studio exceedingly well.

With former Crackers bandmate Steve Almaas both at the helm and taking up bass duties, CP Roth bringing his tight and empathic talents in the form of piano and everything percussive and a select couple of friends lending assistance – Mitch Easter dishing some funky slide sass on the funny and biting “Musician’s Girlfriend Blues,” the late, wonderful Faye Hunter taking over the mic while Haglof’s guitar tears it up behind her on the poignant punch of “Lincoln Letters” – the feel of the record is loose and intimate, whether it’s out on the rambunctious tip like the Blasters-like blast of closing track “Won’t Wake Up To You,” hugging the quirky personal as on “The Button Song” featuring some dandy and adroit soli-esque acoustic finger stylings that’s more Jack Rose than Jack White, or layin’ d0wn the rules on the strutting, rutting “Dog In The Yard” with the Boots-Are-Made-For-Walking bass and Friday night attitude, full of snapping sinew and a salacious suggestiveness that Star Anna might want to take a look at.

On the touchingly existential “24-Hour Prayer,” reflective and gently snarling in its plea for strength in the face of time’s ceaseless – and to a large extent merciless – march, Haglof sings “Should I turn too quick I might see the shadow falling over me,” as sure a comment on the need she felt to make this record as it is a pure philosophical statement of caution. “If you think you want to do something, you’d better do it now” she’s said regarding the sadder rigors of her ‘other’ career and, thankfully, for all concerned, the singer/guitarist has taken her own advice. As we all know, only art and love stand a chance at stanching time’s flow, even if only for a moment, and in Western Holiday Karen Haglof has made a stab at it and come away trumps. A triumph.